How I Fell in Love with the Clash in 5 Songs: Lose This Skin 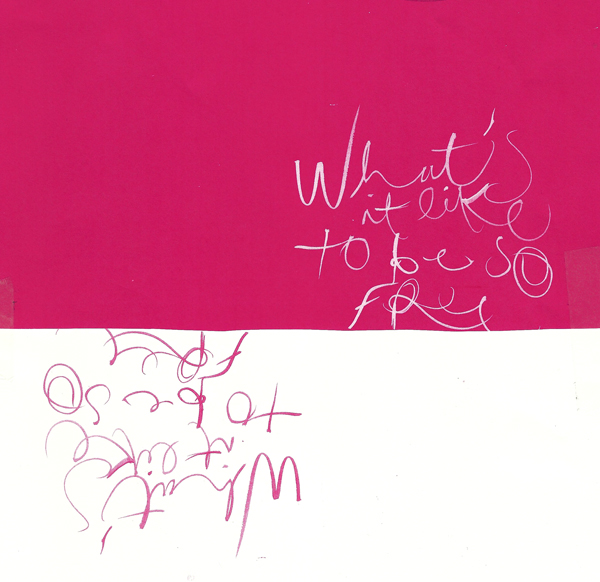 BY LAURA JANE FAULDS (ILLUSTRATION BY JEN MAY)

HI. I need to say some things before you read this.

1) This story features some EXTREMELY candid writing about eating disorder/body image things, so if that sounds like something that might make you uncomfortable, I highly recommend you stay the hell away from it.

2) I very deliberately chose the words "make you uncomfortable" over "be triggering for you"- if eating/body issues are something you're dealing with/have dealt with, I DEFINITELY think you should read it, more than anyone. BE TRIGGERED. LIVE YOUR LIFE.

3) Out of the 5 Clash stories I'm telling, this is the one that talks about the Clash the least. However, it's also the "Clashiest," because it's a story about fighting, and it was the Clash who taught me how important it is to FIGHT.


I want to fuck up a grocery store. I thought of the idea when I was a kid and have always clung to it.
I want to run down every aisle with my arms stretched out and knock all the product off the walls. I want to trample it. I want to shake up soda bottles and spray them all over peoples' faces, crush cereal into cereal dust with my boot-heels, catapult my body shoulder-first into pyramids of produce. I want to throw apples at the wall.
I want to stand on the conveyer belt with a very dead look in my eyes, unscrew the lid to a milk jug and pour it, ever so elegantly, all over the ground.

I walked through the rain line on my way to the gym. When I left the house it was pouring, when I got there it was sunny, and in the middle of the walk was the spot where you could step once to the left and once to the right and feel both. It was the second time in my life I'd ever walked through the rain line.
The four good ellipticals by the window were in use so I walked up the ugly stairs that always smell like they were just painted yesterday. I feel entitled to nicer stairs than these, like I should only be subjected to walking up or down a staircase so drab if there's a fire and I'm escaping it. The top floor of the gym is at attic level, which you can feel in the weight of the air. It's got some pretty shitty energy, that room: someone must have died there once, but in a really boring way.
I tied my shoelaces tighter, started running, and played the Clash's entire discography minus Cut the Crap on shuffle. Because I didn't have anything cooler to think about, I used the music as an oracle. Before every song, I asked the Clash-oracle a question, and extracted meaning from the song it played.
Which Clash song should be my summer theme song? I asked.
It played me Lose This Skin, and I realized that the only thing I want to be is a person to whom can be posed the question, "What's it like to be so free?"

It was thunderstorming on a Monday morning, and I was being tremendously cruel to myself in an Urban Outfitters fitting room. A pair of ochre denim cut-offs were cut high-waisted to fit like underwear, and they looked like shit on me. Lit from my worst angle by some seriously atrocious lighting (I really don't understand how the Urban Outfitters lighting designer could think that lighting would ever motivate anyone to buy clothes, same goes for the sadist who instated the 180 degree mirrors at H&M- I don't want to know what the back of my hair looks like!), wearing clothes that didn't fit me on an off-day, it was easy to focus only on how aces I once would have looked in these stupid shorts- oh wouldn't it be so perfect if I could mix the enlightenment and emotional maturity of my today self with my anorexic body from three years ago? They say hindsight is 20/20, but really, hindsight is only 20/20 sometimes- often never. It's so easy to forget what it felt like to be dying.
I went into anorexia recovery three Aprils ago and succeeded. I recovered- I mean, I "recovered"-
Recovered goes in air-quotes to represent how fraudulent I've felt upon accepting the countless congratulations I've received for recovering from anorexia- it wasn't especially difficult to re-ritualize myself into eating a "normal" amount of food in a day; in doing so, I levelled out at a healthy body weight, which is the easiest way to say to the world, "I recovered from anorexia." But until that afternoon, in those terrible shorts, licking the sweetness of Advil-shell off my lips while whispering "You're fat" to a woman in a mirror whose body looked so bad there was no way it could possibly be mine, I could never get away from the thoughts. I never moved past hoping that magically, somehow, I would get my old body back. I was never fully able to abandon that dream.
Hunger remained my preference. I relapsed a couple of times, endured spells of exercise addiction, laxative dependency, compulsive eating, bulimia- basically every type of bad eating you could imagine. And even when I found myself in times of relative normalcy, eating-wise, every movement I made was still governed by the psychotic belief that I was- let's not mince words here, it was so much uglier than "fat"- let's say grotesque, and that that thing about me, that preternatural disgustingness, was the loudest scream echoing off everything I did, everywhere I was, and every person knew it about me and that was why every bad thing happened. Because they smelt it, they saw it.

If I ever found out about another person thinking thoughts about themselves so nasty as I did, I would cry. It would break my heart.

The constant drone of self-hatred was spelled out all over EVERYTHING. The sides of buildings, every soulless motherfucker's bedsheets, on the insides of my eyelids, the bottom of the bowl. Up all night every night thinking words so bad I couldn't say those words out loud or write them; the explanation for the dissolution of every relationship, no man could ever solve it, and why does every girl every guy dates look like that? I'm making sour faces at sundresses because "I'm not a fucking hippie," imagining the word GEORGE or JOE or DYING tattooed on the inside of my left wrist but it all seems so silly, and I can't do it anymore, I can't hear it anymore- every day, some woman is telling me some thing about someone else's body, and I want her to stop saying it. I don't want us to have to talk about our bodies anymore. I don't want us to have to think about our bodies anymore. None of it matters- don't you care that you're going to die? And you'll probably never be reincarnated as anything, and all the time I have left to be me is maximum seventy years MAX, an amount of time I presently consider unfathomable but will be gone as quick as I got it, and the only thing I want to spend it doing is this.
I don't want to spend it listening to thin women talk about how they're fat, I don't want to spend it listening to fat women talk about how they're fat, I don't want to listen to thin women talk about how saaaaad it is that women who aren't thin think they're fat, and I don't fucking give a FUCK which shapes of clothes look best on your body. I don't want to talk about the way your new dress fits, I don't care that you tried on the six and it fit but you went with the eight, wow, that's so fucking awesome that you fit into a six but went with the eight. Wow. That is so incredibly fucking interesting to me. Oh my God, why am I doing this to myself? Why am I sitting in a room wasting my fucking money on drinking the drink I'm drinking while listening to a woman say "I always wished I could be anorexic, but I didn't have the discipline"? Why am I over-apologizing for saying something 1000% more restrained that what I wished I could have?
I don't want to talk about the fucked up thing about her body someone else said, I don't want you to tell me I look skinny when I wear a certain outfit that is black, I don't want to talk about how positive your relationship with eating is these days, I don't want to talk about how positive my relationship with eating these days.
I don't want to condemn women for hating their bodies, and I don't want to be proud of women for loving their bodies. I don't want to talk about whether I think a certain thing about the way a certain woman eats or works out or lives her life is fucked up or not. It's all fucked up.

I took off the shorts because they didn't fit me and so it made no sense to be wearing them.
"I'm not going to do this to myself anymore," I decided, and that's how easy it was. I felt a physical relief, as if a braid pulled too tight had been unwound.

They say that what doesn't kill you makes you stronger, but they're just saying that so you don't kill yourself. It's just another one of those things that humans have been saying to mean something cool and noble for so long that we all forget it's completely meaningless, like "from the bottom of my heart"- what the fuck is that about? We're such sad and pathetic creatures, we humans, making up all this crud about your heart being the place in your body where the love comes, we draw hearts as something other than what they look like, and we preach this shit. We say things like "from the bottom of my heart," even though we know full-well it's straight wrong.
They're no "triumph over adversity," only adversity, and tomorrow. What doesn't kill you weakens you, so accept it and keep moving; allow yourself to be weakened but honest, not "strong" and full of shit. We've invented the phrase positive pain so we can congratulate ourselves for doing nothing but aging, but I don't think there's anything positive about any pain I've ever felt. I don't believe that pain should ever be validated.
It's impossible to defeat something truly but without remorse. There is no difference between the top and bottom of a person's heart.
Posted by Elizabeth Barker and Laura Jane Faulds at 1:16:00 pm