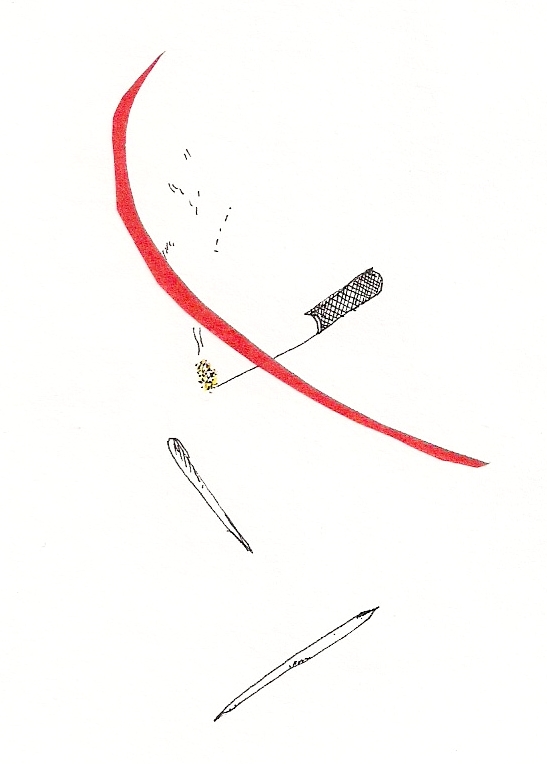 BY LAURA JANE (ILLUSTRATION BY JEN)

On the second day of nine cigs per day I had an emotional breakdown in the middle of the day because it was miserable torture and I realized I couldn't finish my plan and I'm a planner and so it felt like failure- that's my other shit. And also I was confused about how I would quit smoking if I wasn't using my plan anymore because, I realized, I really do want to quit smoking! But my plan is so dumb, as plans usually are. You can't plan your life out; all it does is ruin the story. The only thing a person should ever bother planning is the night and time that you're going to go get dinner and drinks with someone.

I woke up on the morning of that evil Thursday thinking only of cigarettes. I spent my whole day obsessing over cigarettes and I knew, I knew, that if I was going to carry out this BULLSHIT plan I as an aggressive chain-smoker made up for myself a month ago based on literally NOTHING, I would have to sacrifice my entire life in it's name. It would be anorexia all over again, only with cigarettes instead of food. When I was sick I'd wake up in the morning and eat my lame breakfast of four dried pineapple rings and an apple and then starve myself all day until dinnertime and during the hours that fell between breakfast and dinner I thought only of dinner, and, like I said, it sucked. It was boring. My life is big and I'm smart and interesting and a writer and I refuse to waste all my wonderful brain-space on thinking only of when I will smoke next. I will NOT allow my head to EVER get that shitty and boring again!

A big part of me felt like maybe I should just quit cold turkey beginning the next day but the other part of me, which I found was bigger, felt totally in no way ready to do that. I hung out with a friend that night, we got stoned, and I said, "FUCK IT. I'm going to smoke as many cigarettes as I want tonight, and then I'm gonna figure out what the fuck I'm gonna do  about quitting smoking tomorrow," and then I said, "I'm gonna smoke my little heart out!" and I was really excited to chain-smoke my night away for about five seconds before realizing I didn't want to chain-smoke, because that would be regressive and stupid. That would be actual failure.

We went out for dinner and drinks and I smoked one and a half cigarettes and then I came home and called my dad. He is the only person I know who has successfully quit smoking for an extended period of time. I explained how I felt and then in the middle of blabbering all over myself I suddenly felt a wash of calm fall all over me, a sheet of raining sand that didn't hurt my eyes, and I said: "I'm going to give myself another week of smoking eleven cigarettes a day," and after that it all was fine. My dad said, "There's usually a third option," which is excellent life advice. All the pressure and anxiety were gone and I felt so safe and comfortable in my home and body again. I don't know why those two cigarettes between eleven and nine meant an entire world but they did.

So I decided to do that, and I did that, and I've had a very nice week! I worked every day from Friday through Monday, and on those days, I never smoked all eleven. I even had one day where I smoked six- SIX! And I think that what I need to focus on, right now, rather than using some arbitrary amount of daily smokable cigarettes as a gauge for my success, is how fucking AWESOME it is that in a mere three weeks I've cut the amount of cigarettes I smoke a day down by half and that, even when I gave myself the go-ahead to go back to any-smoking-where I wanted, I didn't, because I couldn't, because I don't want to. I really don't.

I'm not sure what's going to happen next, and I'm alright with that. I think that once the week finishes, tomorrow, I am going to change the "eleven" number down to "ten" because ten is a cleaner number and I might want to keep myself there for awhile, and having it be "ten" makes more sense. I'm thinking about taking Zyban, and I'll probably buy an "e-cigarette starter kit" pretty soon. I'm thinking about a lot of things, and I don't know which of them is the right thing, and I'm okay with taking the time I need to figure it out. Maybe I'll smoke ten cigarettes a day every day for the next year of my life- I hope I don't, I hope I quit before this winter, but I'm really into telling myself that whatever I decide to do is TOTALLY FINE LAURA JANE I LOVE YOU YOU'RE AWESOME IT'S ALL GONNA BE OKAY XOXOOXOXOX, because what I care about more than anything is making this process comfortable for me, the protagonist of this particular plotline.

There's no one perfect way to quit smoking- if there was, we'd all do it, and nobody would smoke anymore. I often find myself wishing that the government would ban cigarettes. Cigarettes wouldn't exist anymore, so all the smokers of the world would just have to band together and help each other through feeling aggro and unfulfilled for a couple months and then we'd all be fine. It would all be over.
Posted by Elizabeth Barker and Laura Jane Faulds at 10:04:00 am