FOXYGEN IS SO GOOD! (Plus: 5 Bands That Wes Anderson Made Me Love More Than I Ever Did Before) 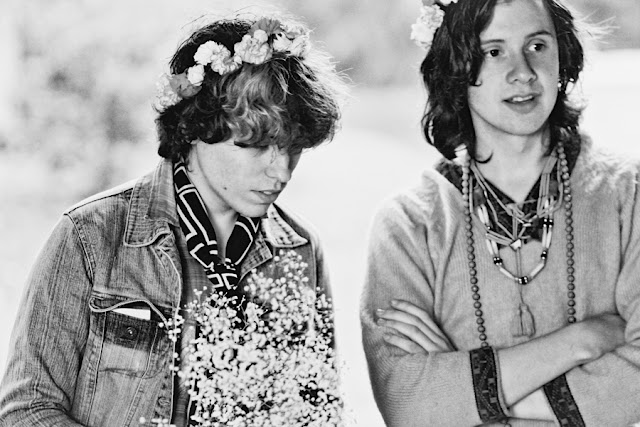 There's a new band called Foxygen and I love them a lot. They're little babies (22) and their songs are scrappy and sweet and not of this century and I bet they're going to sound really good in the fall. Yesterday I bought their EP Take The Kids Off Broadway and read the entire feed of a Twitter account called Ghost Facts (sample Tweet: "The ghost is the closest currently-existing evolutionary relative of the snowman") and thought how satisfying it will be to listen to Foxygen and read Ghost Facts in about a month and a half, when the air's a little blustery and it makes sense to drink pumpkin coffee and eat your apples with candy corn.

You can listen to Take The Kids Off Broadway here. Here's a song called "Waitin' 4 U":

One thing to note about Foxygen is their bio says they're the "raw, de-Wes Andersonization of The Rolling Stones, Kinks, Velvets, Bowie, etc. that a whole mess of young people desperately need." That's a compelling point to make in a bio, and I absolutely see what the bio-writer's driving at -- but in the end, the goo-goo-eyed optimist in me rejects the notion that kids today think of The Rolling Stones, The Kinks, The Velvet Underground, and David Bowie as "those dudes with the songs in Wes Anderson movies." Also, and more importantly, the way Wes Anderson uses music in his movies tends to intensify my love for the band/artist at hand, which is kind of wonderful. He elevates every song, and I cherish him for that. Here's a few nice examples:

1. THE ROLLING STONES. I started obsessively loving The Rolling Stones when I was 24. If you made a little pie chart of all the factors that contributed to the onset of that obsession, about 33 percent would be taken up by my parents (and, in particular, the time my dad and I were in the car and I was like seven-years-old and he said to me, "A lot of people think the greatest song of all time is 'Stairway to Heaven' by Led Zeppelin. But it's not. It's 'You Can't Always Get What You Want' by The Rolling Stones"), 37 percent would go to having recently broken up with a really great guy and feeling totally all right about it, 29 percent would have to do with just being a person who loves rock-and-roll music in general, and the remaining 1 percent would belong to Wes Anderson. The first Rolling Stones record I bought was Aftermath, which has the song "I Am Waiting," which is in the movie Rushmore. "I didn't know The Rolling Stones sounded like this sometimes," I thought the first time I saw Rushmore. Wes Anderson is exceptionally good at helping you uncover little hidden things like that.

2. THE WHO. In high school there was a thing with a boy who loved The Who. On our first "real date" we went to see our friend's band play and in the car on the way there we listened to Live At Leeds, which had just come out on CD. It's generally not all that sexy to be deeply passionate about The Who, The Who just aren't a very sexy band, but I thought it was exciting that this boy chainsmoked and played guitar and was a whole year older than me and kind of a stoner. Now when I listen to "A Quick One, While He's Away" I always play the Live At Leeds version and think of that car ride and of Max Fisher walking out of the elevator, lugging his beekeepers box, pulling his gum from his mouth and sticking it to the wall. I just watched that part all over again and it totally gave me the chills.


3. THE ZOMBIES. When The Life Aquatic came out I was heartbroken and when Ned Plimpton dies and they play "The Way I Feel Inside," I started crying and kept on crying for the remainder of the movie, faking like I was just so shattered by the tragic death of Ned Plimpton. But I wasn't; I didn't really give a damn about Ned Plimpton or anyone else in that movie: I just felt like crying and seized on the opportunity to mask my dumb heartache as a highly refined sensitivity to the tender beauty of Wes Anderson's art. It was effective, I was grateful, I love that song and I hate it so much.

4. THE CLASH. The release of The Royal Tenenbaums coincided with my getting way into Combat Rock. As a result of that, anytime I thought of the Margot-getting-off-the-bus scene, I'd hear the song as "Straight to Hell" instead of "These Days." But The Clash don't belong to Margot, they belong to Eli Cash, and four summers ago I met a boy who wore a Clash shirt on our first date and who'd worked on The Royal Tenenbaums and had a copy of Eli Cash's book Old Custer in his living room. I think it'd be fun to write a rambling, Wes Anderson-inspired folk song with the lyric "And Eli Cash, he loved The Clash," and I'd also like to go back to that boy's apartment and steal Old Custer from him. Cosmically speaking, I truly believe it should be mine and not his.

5. VAN MORRISON. One of the 100 nicest Sundays I've ever had was the Sunday two springtimes ago when Emily Richmond took a mini-break from sailing around the world and came to L.A. for a few days. We went over our buddy Blair's house and Blair made us heart-shaped waffles and we listened to Moondance on vinyl, and then went to the thing at Jet Rag where they throw a bunch of clothes on the ground and everything's a dollar. Later in the day had a birthday party for Emily and Blair on Blair's roof, and I brought them this cute cake: 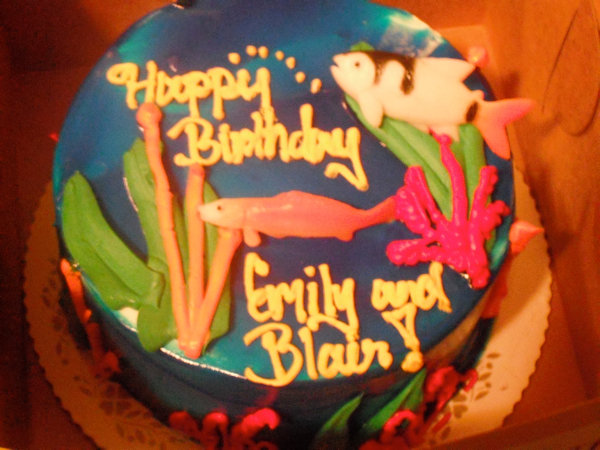 Blair told us a story about how a friend of hers was getting married soon and wanted to play "Everyone" as they walked back down the aisle at the end of the ceremony, but was afraid that it would be too Wes Anderson-y. But I think it would be lovely. I think we should all get married to "Everyone" -- or at the very least, we should definitely all get divorced to "Queen Bitch."
Posted by Elizabeth Barker and Laura Jane Faulds at 10:27:00 am