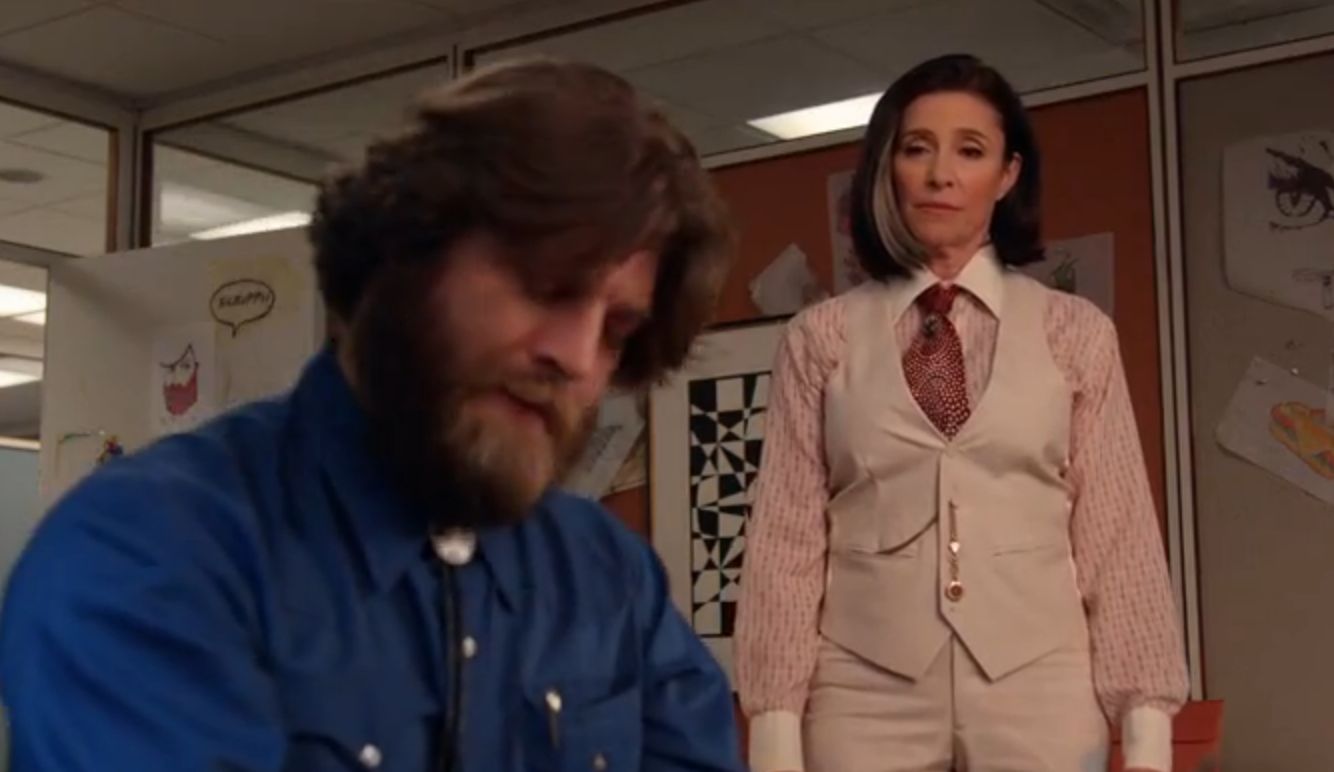 LJ: Who cares about Pima? Who cares about Diana? Who cares about "Marie-France"? Why is Matthew Weiner doing this to me? Does he not realise how little time I have left to experience the precious experience of finding out new news about my best friends in the world Don, Pete, Roger, Peggy, and Joan? Why is wasting my valuable Don, Pete, Roger, Peggy, and Joan time on losers like Pima? I hate Pima! Did any of you not hate Pima? Were any of you not taken aback by the intense ugliness of her vest, fat tie, and waistchain (Wait- is it called a waistchain? What is that weird-ass piece of jewellery even called? (Just kidding- Please never tell me. It's irrelevant.))? Is Pima going to be a recurring character? I can't decide which is worse: Pima being on the show again and having to continue learning information about her, or Pima never being on the show again and being forced to come to terms with how deeply Matthew Weiner wasted my time by having her on the show this time. My least favorite Pima moment was definitely when she asked Peggy if she'd ever been married and Pegs said no and then Pima was like "Me neither- ah, the adventures I would have missed" and you're just like "OKAY Pima, we get it, you've obviously fucked a billion people and are probably the world's foremost expert on, like, arrondisements. And no, I don't want to hear about the time you went to Copenhagen with Gertrude Stein." 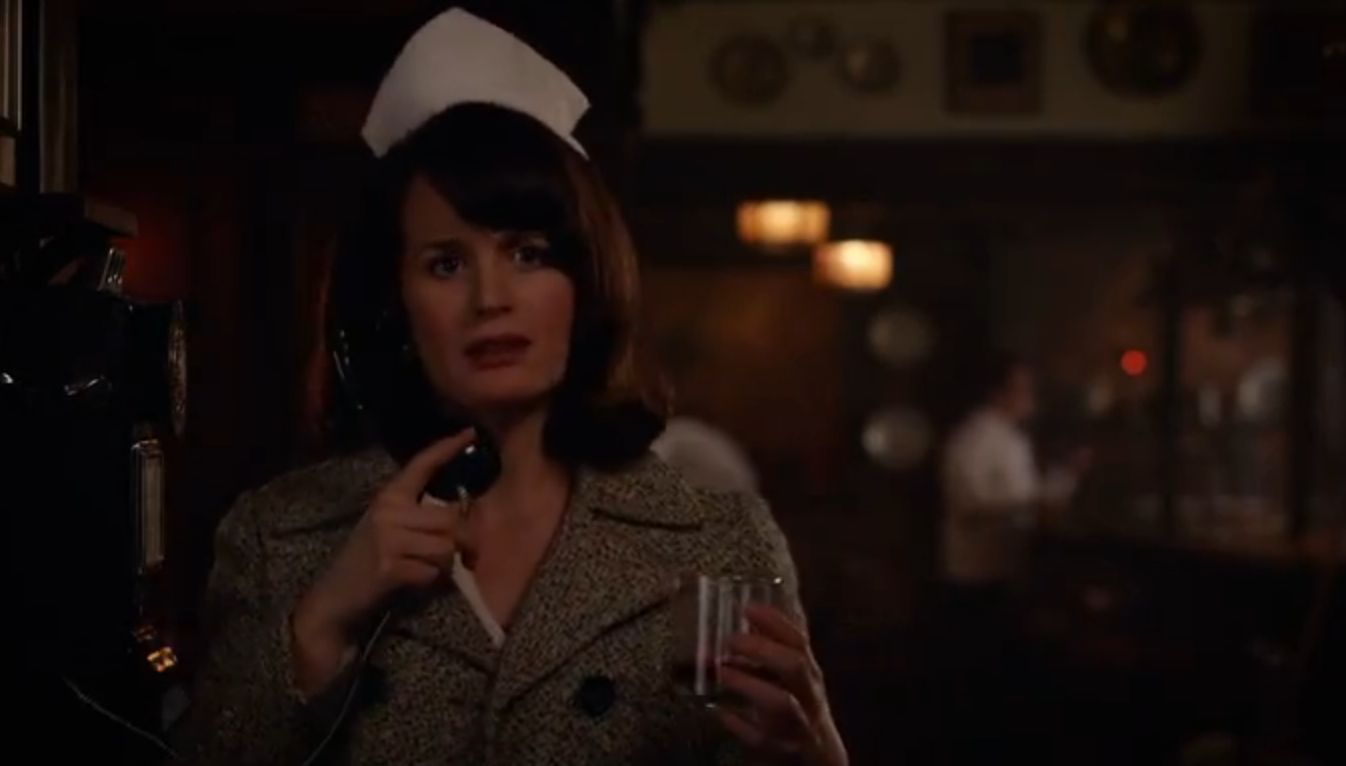 I'm pretty whatevs about Diana, but she's fine compared to Pima. She had some pretty cool lines at the beginning of the ep, before she got all ham-fistedly nouveau-Dick Whitman on us. I thought it was hot when Don asked her if she wanted a drink and she said "I'm already drunk" completely non-sloppily. I had really high hopes for Diana, at that moment. I was like, "Oooh, Diana, you're such a Don!" But as soon as her whole "second life in Racine" thing was revealed, I lost my ability to feel in any way invested in her storyline. No new characters! That's my final season of Mad Men motto. It's the me watching Mad Men equivalent of when people on the Internet say "No new friends." 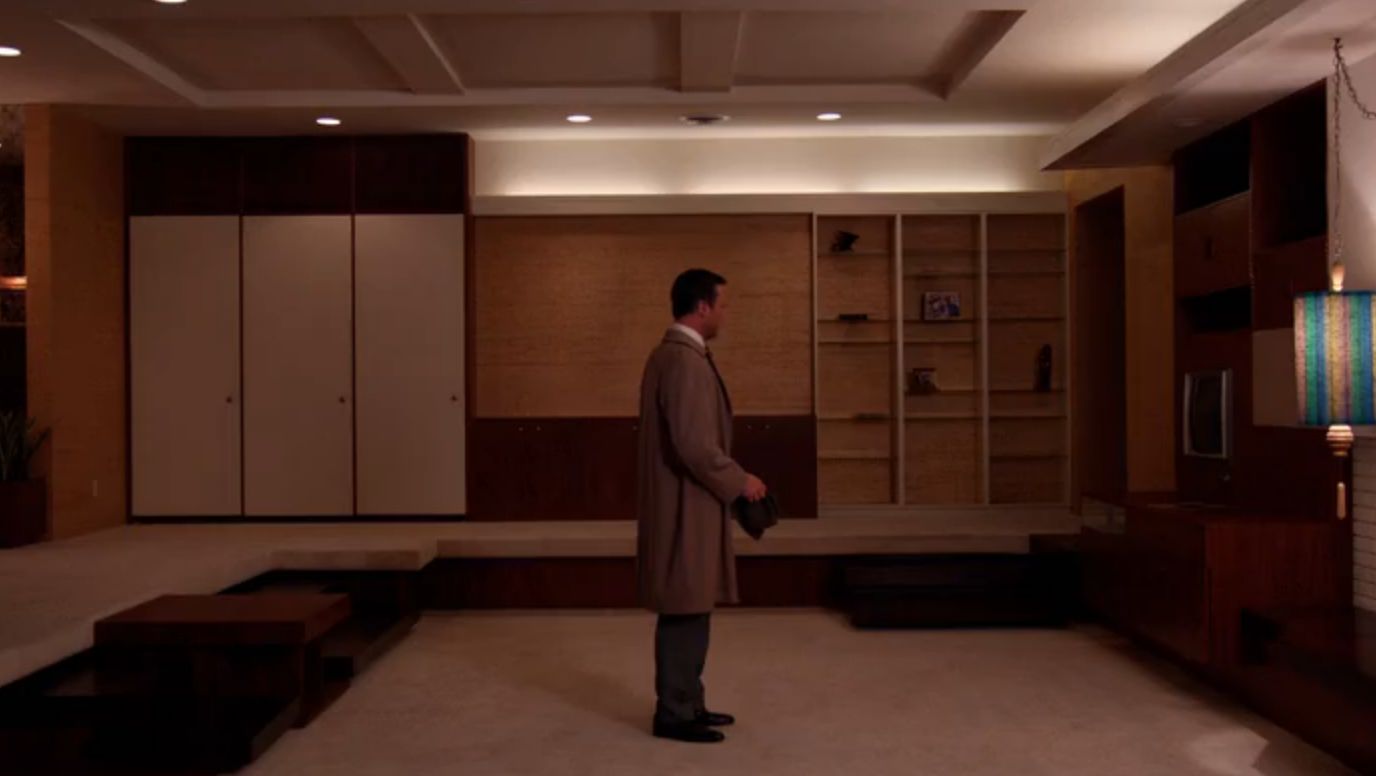 I loved Don this episode! My old friend Don. He was so strangely sweet, and I nearly died (don't worry, just of cuteness) when he told Diana "I'm just pleased you're not cross." I'm just pleased you're not cross! It's a pretty normal thing for a British person to say, an old British person that is (but I guess just a regular-aged British person, back in 1970), and I think it would sound phony if 99.99999infinity% of North Americans said it, but somehow Don Draper managed to be the ONE American guy who could pull it off. Speaking of British people- is anyone else pissed about how Mad Men has thus far neglected to mention the Beatles' recent break-up? Probably not. Probably only Liz and I. But still! How hard would it have been for them to throw that little tidbit of information into some minor scene? Just make, like, Mathis say it. Or Ed! As far as tertiary characters from the copywriting department go, I'm only really into Ed. Remember how cute it was when he asked Peggy "I want you to be honest- should I let my hair grow out?" and then she ignored him? I say: "Sure, Ed!" I could definitely go for some new "Ed's hair" material to write about. He's the lone exception to my "No new Mad friends" rule. 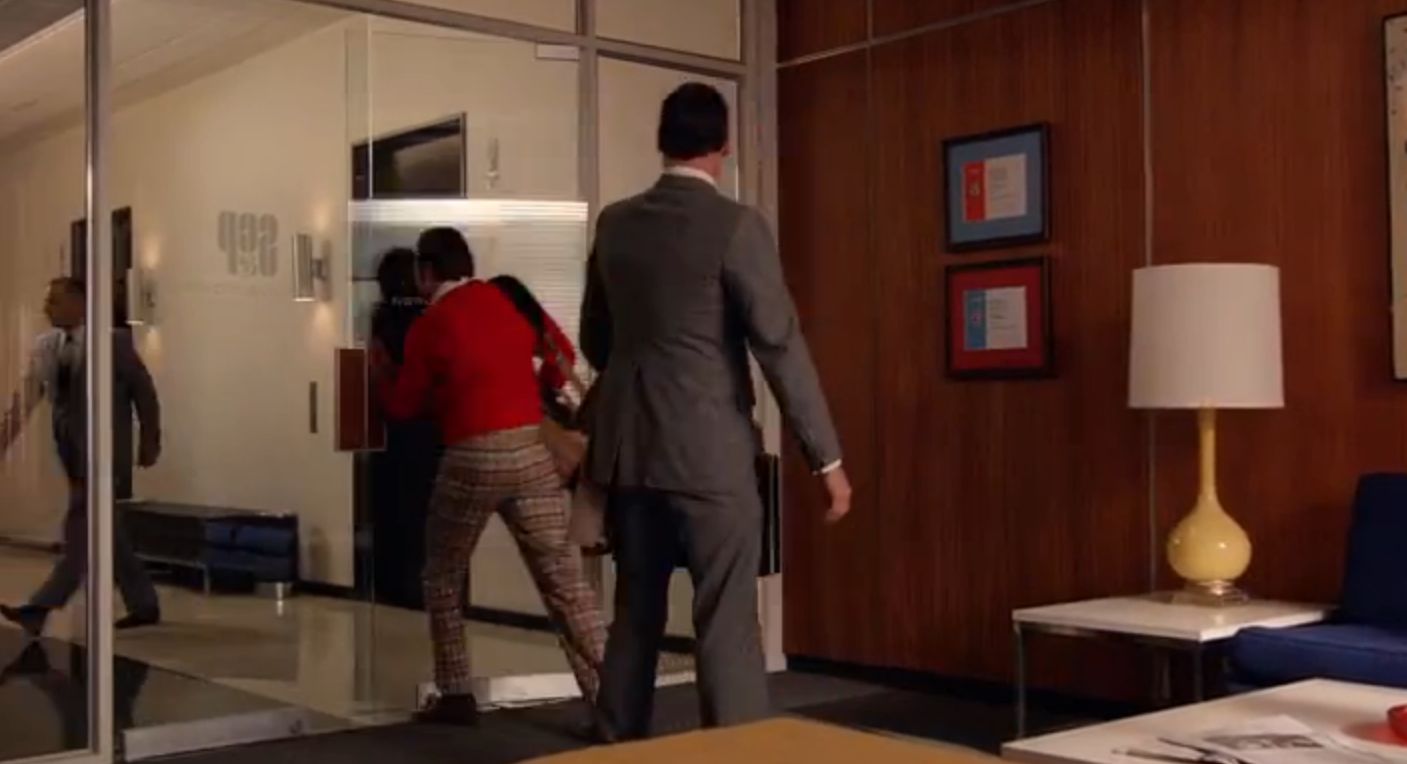 Today I decided that, from now on, I'm going to end my installments of Our Weekly Mad Men Column by appointing the Mad Men character who did the best job of being loveable to me my "Mad Man Of The Week." This week's first runner-up for Mad Man Of The Week was Marie Calvet, for being a general badass re: the whole selling all Don's furniture deal (Cool move, dude! Seriously cool move) and for saying "Let her go cry in church" about her losery daughter Marie-France, who in retrospect might have brought even less to the Mad Men table than Pima, and certainly gave Pima a run for her money in the Stupidest Name Of The Week contest I've secretly been running in my head this whole time (In the end, Pima took the cake. Stevie won last week; historically, Duck Phillips has won a lot too). But this week, the ultimate Mad Man Of The Week prize goes to...

Pete! For "Jiminy Christmas" and for cigarette-shaming Don, for "You're going to rent pants?" and for replying to Don's too cool for school "I'll throw my tie over my shoulder and roll up my sleeves- they'll love it" with a scathing "They probably will," and storming out of the office in the Pete Campbelliest huff that Pete Campbell ever Pete Campbelled. I'm so grateful for how Pete Campbell is always there to remind me that I'm not the only person in the world who JUST CAN'T WIN. He's the Patron Saint of the Down-on-their-Luck, which, when you think about it, is a very noble thing to be.

PS: Can you believe that Sekor Laxatives is still around? It BLEW MY MIND when Sekor (Sekor? C-Kor, Seeckor... whatever) Laxatives came up in that Roger, Caroline and Shirley scene. Seriously! SC&P have managed to hang onto that account since Season One! Amazing work, whoever's account that is! (Probably Pete.) 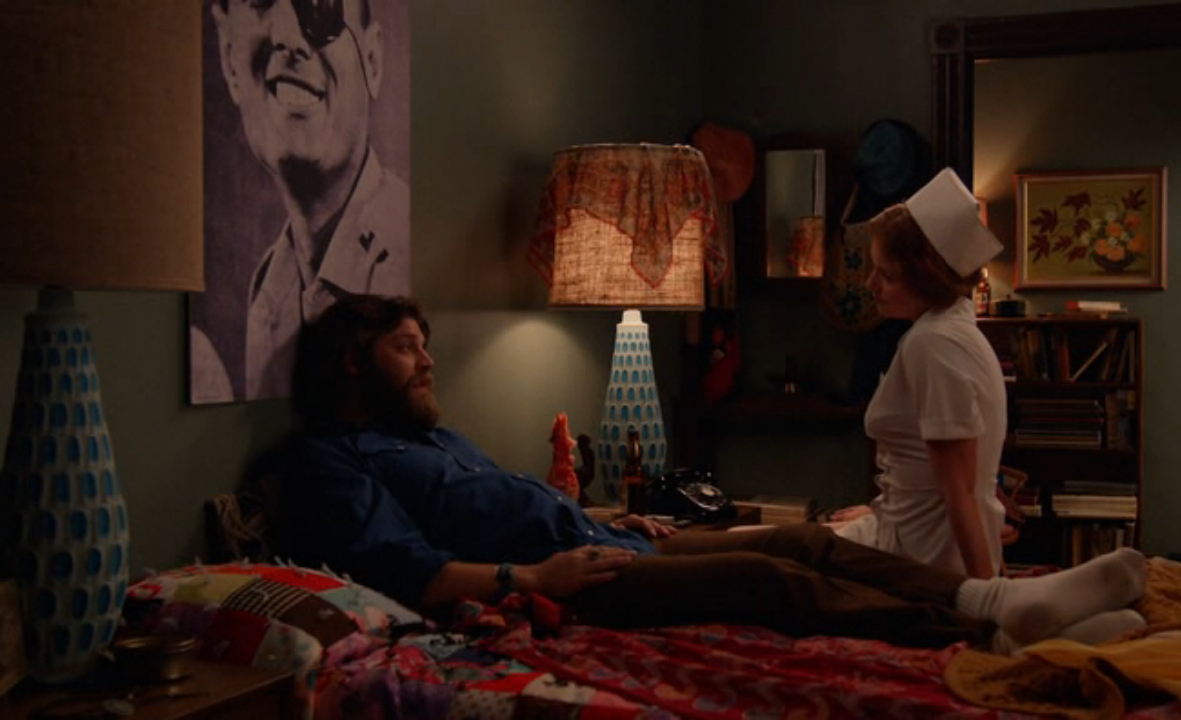 LIZ: How do we feel about Stan's girlfriend? I wasn't totally on board until Pima started talking shit about Elaine being "overdeveloped" and unworthy, and then I instantly went full-on TEAM ELAINE. I'm glad she's a nurse, and one of those nurses who's constantly in her nursing uniform, like Terri on Three's Company. When Stan Rizzo has his Mad Men spinoff set in Venice Beach, she and Terri can be nurse friends, and Stan and Jack Tripper will be such deep bros. I've also decided that when Venice Stan goes to the taco stand he gets a minimum of five tacos, and at least one is something adventurous like buche. Stan Rizzo's got "adventurous eater" written all over him.

I also like the Richard Prince-y vibes of Elaine's nurseness. If Elaine were a Richard Prince painting, she'd be Second-Chance Nurse: 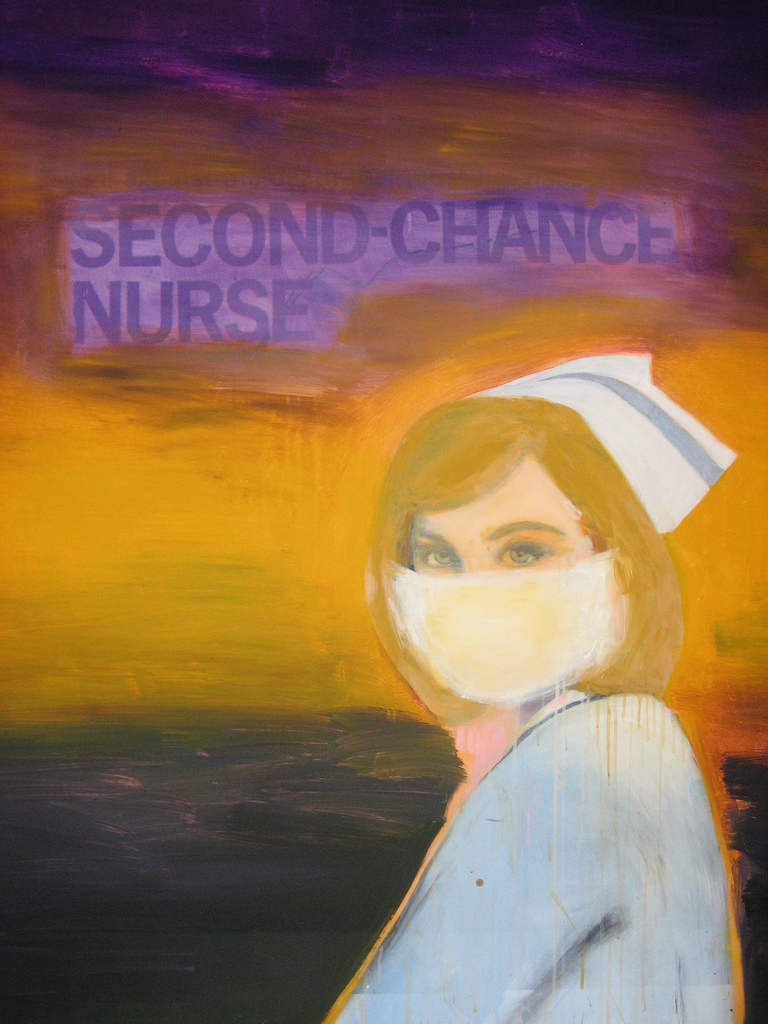 But overall I agree with LJ on "no new characters." Really the only Diana-related thing that interested me in this episode was when she first came over to Don's place and he did that thing of pressing his nose into the crown of her head. Such a weirdly intimate expression of affection, for someone you've spent a total of about 17 minutes with. In that moment I felt the easiest kinship I've felt with Don Draper since that day in the beginning of the seventh season when he was eating a candy bar and drinking a Coke at the same time. Sometimes Don is just some weird kid who wants things to be sweet. 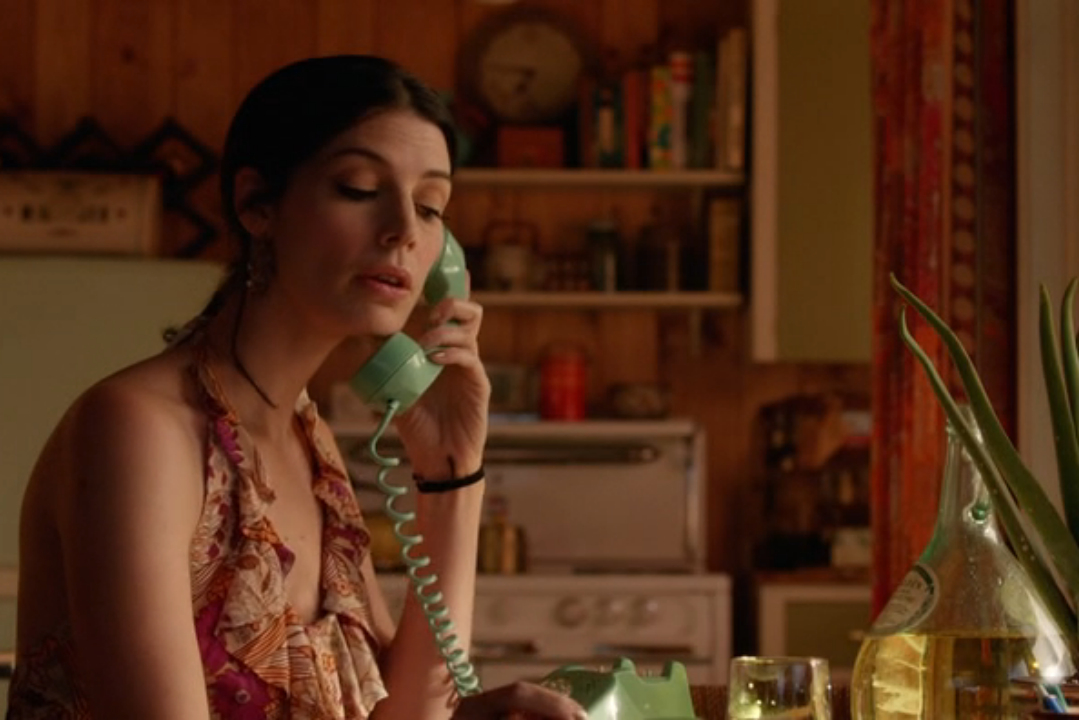 Megan is constantly drinking white wine in the middle of the day! This is by far the best thing about Megan. Look at the size of that bottle. I also liked when she told her sister: "It's a sin to be a ghoul." It's rare to work a word like "ghoul" into conversation and actually make a fairly insightful point. Thanks to Megan Draper and dictionary.com, I now know that one definition of "ghoul" is "a person who revels in what is revolting." 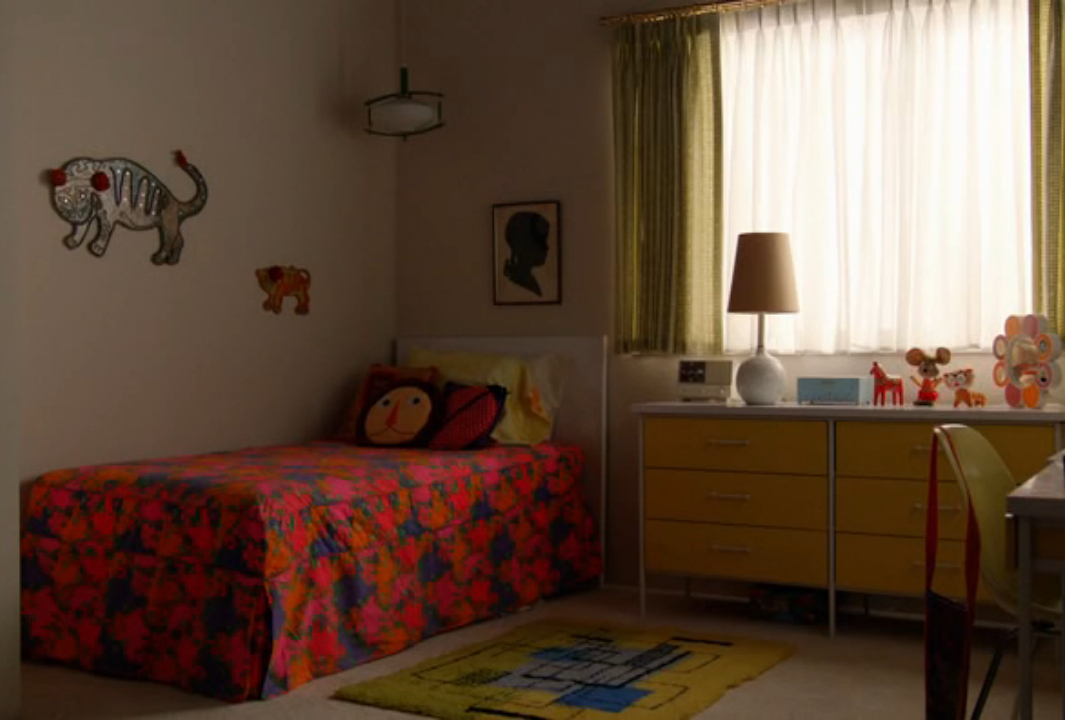 Sally's room is so great, but - where on god's green earth is Sally? I heard somewhere that some of the remaining Mad Men episodes are going to be longer than usual, so hopefully next week will be like six hours of hanging out with Sally at boarding school, listening to Melanie or Simon & Garfunkel or Carpenters records, sneaking cigarettes, reading this weird issue of Teen magazine, ideally with zero Glen Bishop presence (sorry, I've got a high Glen Bishop tolerance, but I don't wanna waste my remaining Mad Men time on him either). 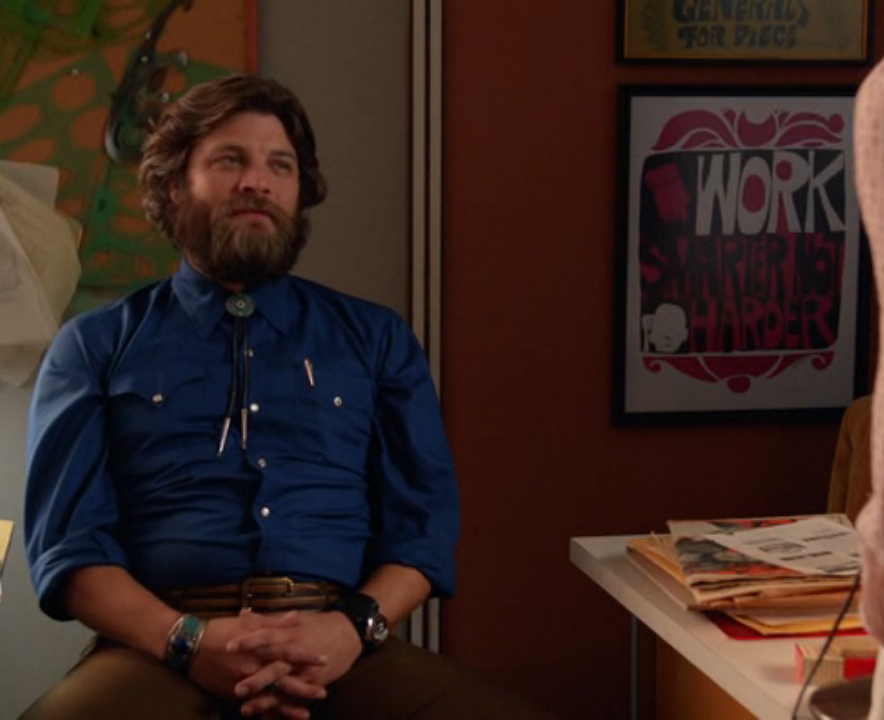 I'm always curious as to what Don's opinion on the art department's "Work Smarter Not Harder" poster might be. I'm guessing it's maybe similar to my feeling about that Cheryl Strayed "Write Like a Motherfucker" mug, which I find both cute and vaguely distasteful in its cuteness. Something in me just bristles at the notion of cutesifying what should be internalized, and I'm pretty sure that old nose-kiss Don Draper would side with me on that.

I also agree that Pete Campbell is the best person in the world. I love how fat he is now. I mean really he's not even remotely fat, but he's definitely a bit puffed up, worlds away from Chip-n'-Dip-era Pete. And I'm dying to know what song's playing in his car during the driving scene: some site called TuneFind.com says it's "The Train" by The Souls, but I can't dig up any other evidence of that song existing. I've tried listening closely to the Pete's-radio song, but to me all it really sounds like is Foxygen. It actually probably is Foxygen. Pete Campbell's always been way ahead of the curve.

Posted by Elizabeth Barker and Laura Jane Faulds at 11:59:00 am