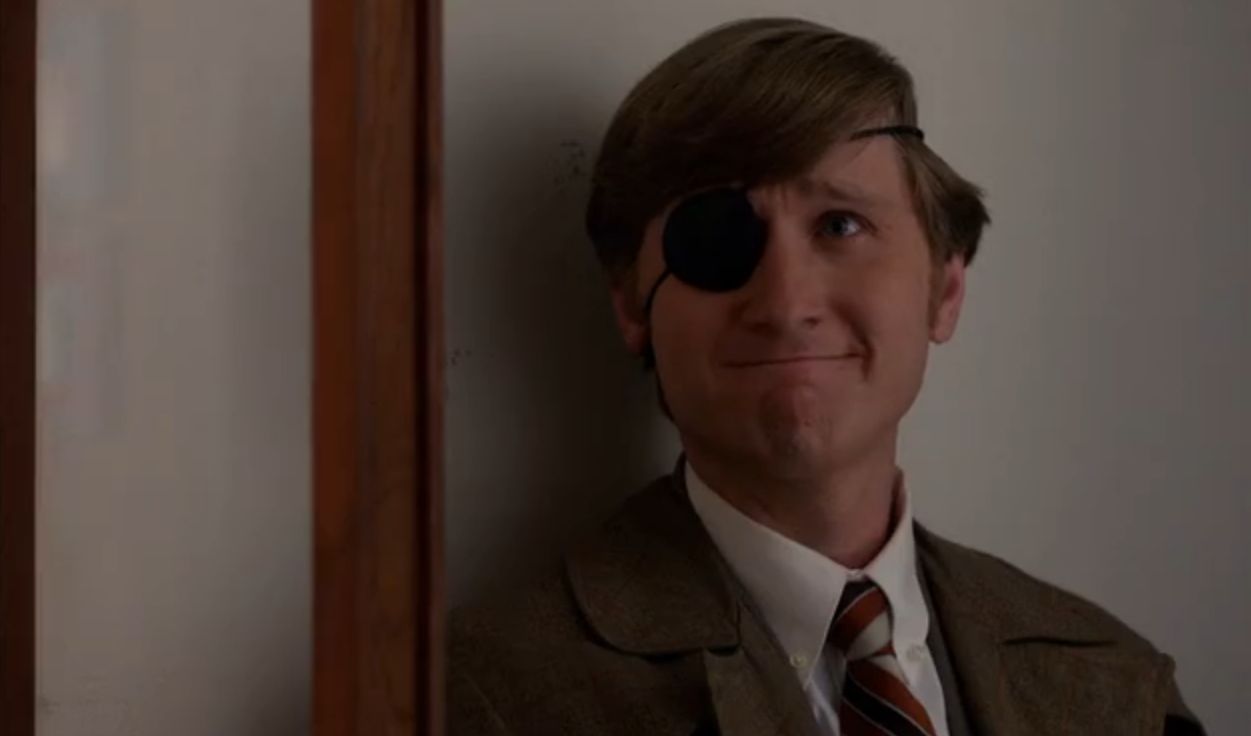 BY LJ AND LIZ


LJ: So! Here we are! It's finally happened for us. It's April of 2015! Mad Men is ending, I moved to England, and I'm turning thirty in June. My life, for so long, has been focused on my own fanatic desire to find out the answer to the question: "What will my life be like when Mad Men is ending, I'm about to turn thirty, and I live in England?" Now I know! The answer is: "Pretty cool, m8." But also pretty boring, since that's just life's style. Even Mad Men is kind of boring! You know? Mad Men season premieres are the most boring episodes of Mad Men around. I'm always a little bit let down by them, and then I pretend I'm less let down by them than I actually am since I'm such a passionate Mad Men lover and I feel guilty speaking a single word against it. The first episode airs and the texts from all my Mad Men friends start rolling in, and I'm all "Yeah! Roger Sterling's mustache! Oh my God! So crazy!" but it's not that crazy, guys, is it? It's a pretty natural progression, for Roger.

Something I like is that Roger and Ted Chaough are the two characters they chose to give cool 1970s mustaches to. Imagine if three seasons ago someone was like "What is the major characteristic that Roger Sterling and Ted Chaough have in common?" You would have been like "I'm stumped." But now it's April of 2015, and we're all like fifty billion years old, and the answer is "A mustache." So cool how now we're all so wise. I love it about myself. This wisdom. 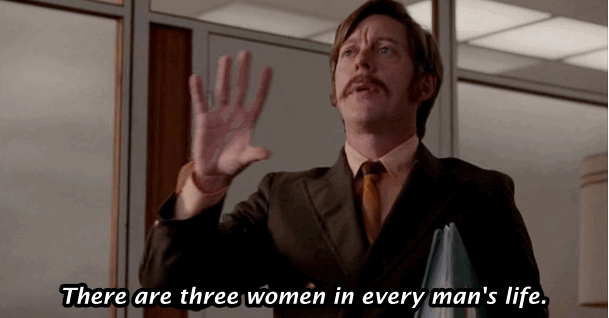 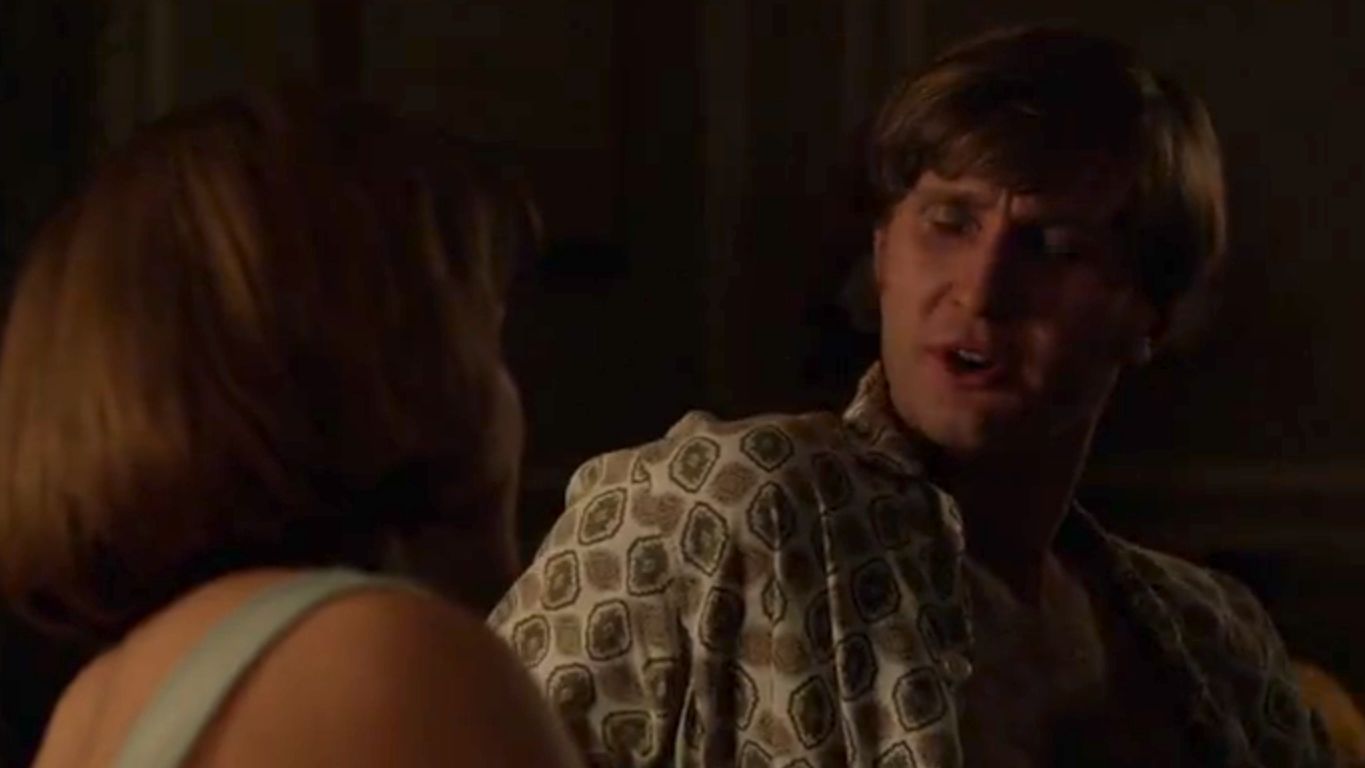 Ken's eye. Ken's eye! "Seeing Ken's eye" was the most exciting that happened on this week's episode of Mad Men by far. I think so much about Ken's eye. I guess it's gone, huh? The eye itself, I mean. The eyeball. I guess his weird, wet, purplish, fluttery eyelid is covering up a big ol' socketful of NOTHING. Nada. I'm glad to finally find out the truth about Ken's eye, as I was unclear about what was up with Ken's eye for all of last season. (the truth is: he has no eye). I liked when his wife said "You gave them your eye!"- so few situations exist where that could be an appropriate sentence to say! I don't understand why Ken is so chill about having his eye blown out of his skull and now only having one eye forever. I get that he's supposed to be a relatively happy-go-lucky character, but losing an eye? I, personally, have an extremely minor eye disorder called Dry Eye Syndrome, and I freak out about it, like, once a day. 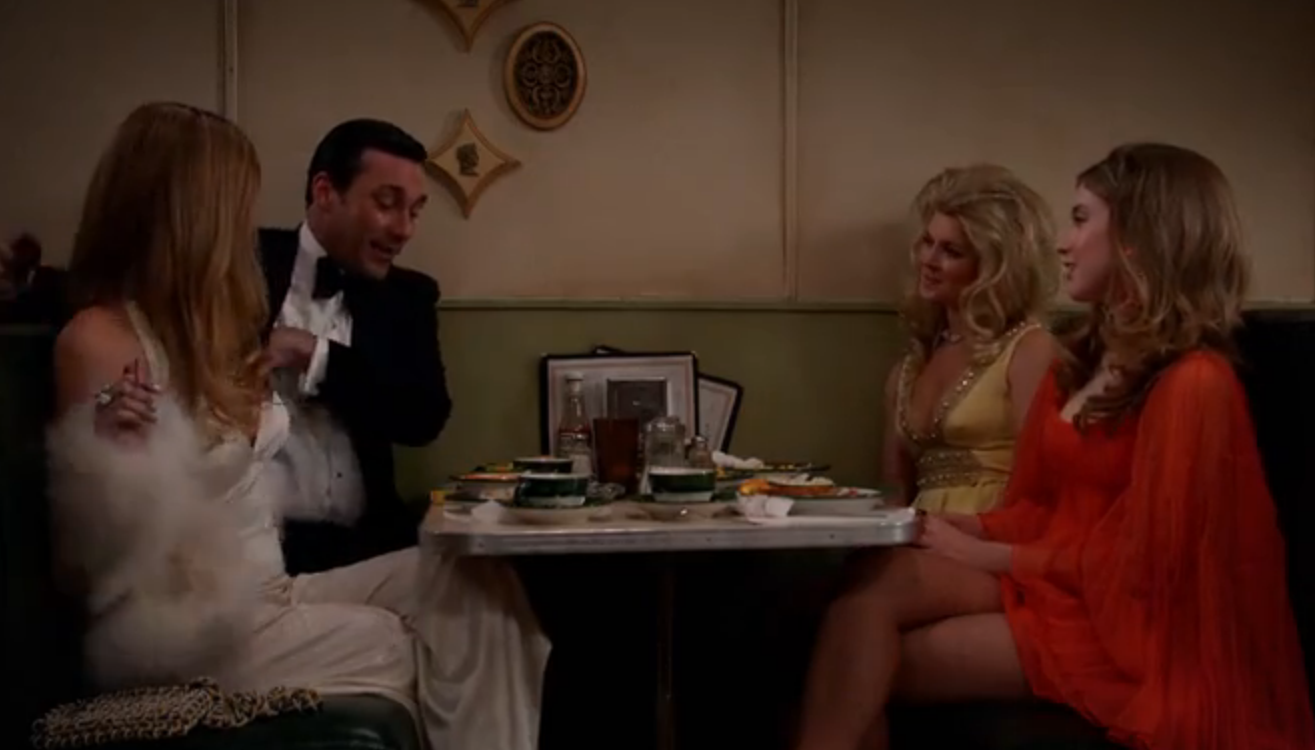 Here's Don. Don and I got off to a good start in this episode- I thought it was really cool and impressive how he was telling his bevy of hot babes and best pal Rodge a hilarious anecdote about his whorehouse past. If I were Don's therapist, I would be really proud of him him for doing that. I think it was the most psychologically healthy thing I've ever seen Don do. That, tied with the time he went swimming and wrote in a notebook.

After that "breakthrough," things went downhill for Don and I. He mostly bored me. When he went to Rachel Menken's shiva his eyes looked like two pinpricks, like a cartoon character's eyes, like two pools of pure black. That was interesting to me. 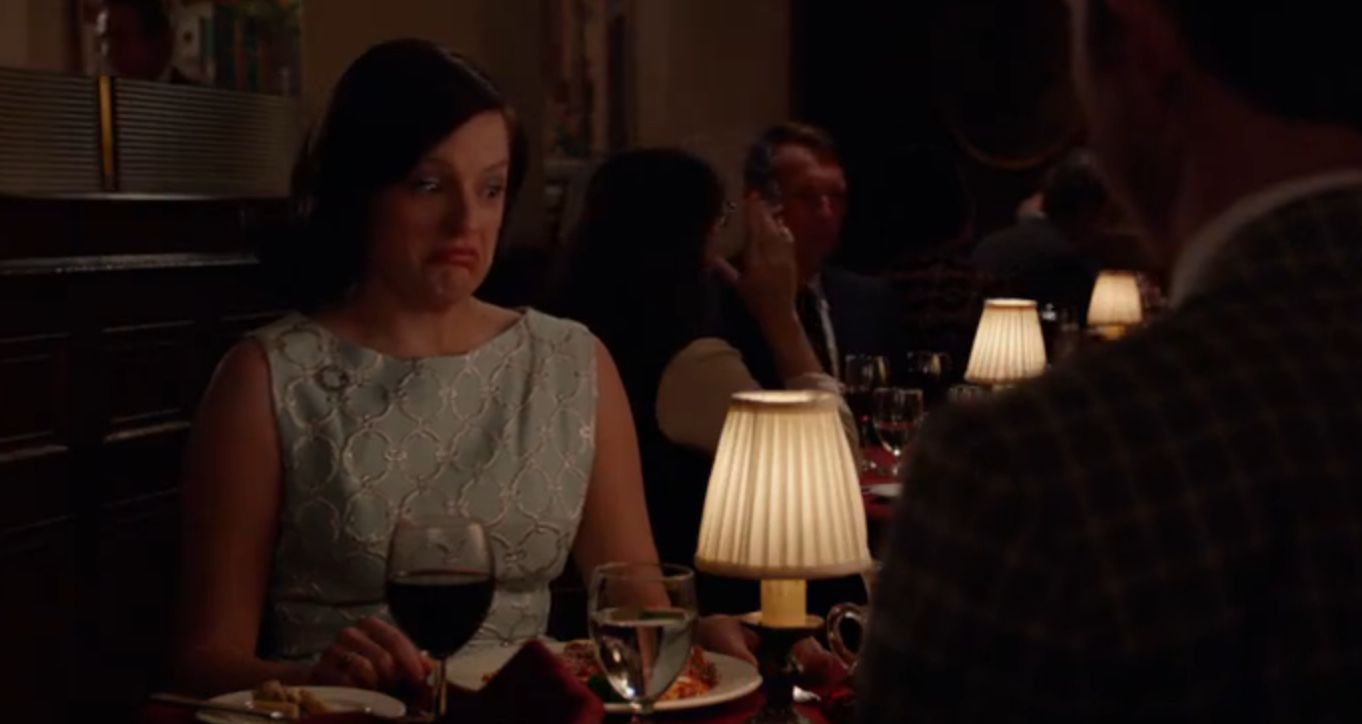 I can tell that this is going to be one of those seasons of Mad Men where I relate to Peggy Olson A LOT. I just started a new job that I care about, so I've got a bit of an "I've got something to prove" mindset going on. When it comes to our behaviour in the workplace, Peggy Olson and I share a similar approach to constantly undermining our own excellence: so tense! I feel like it would be cliche to use the word "defensive" here.

I think Peggy's biggest problem here was that she was drinking red wine- at an Italian restaurant in 1970, so it must have been Chianti. Peggy Olson's not a Chianti drinker, that's just obvious. If I could do anything in the world with Peggy Olson, I'd play her the new Courtney Barnett record and we'd share a bottle of white Burgundy. I hope she goes to London instead of Paris. She'd like it here. How repressed people are. 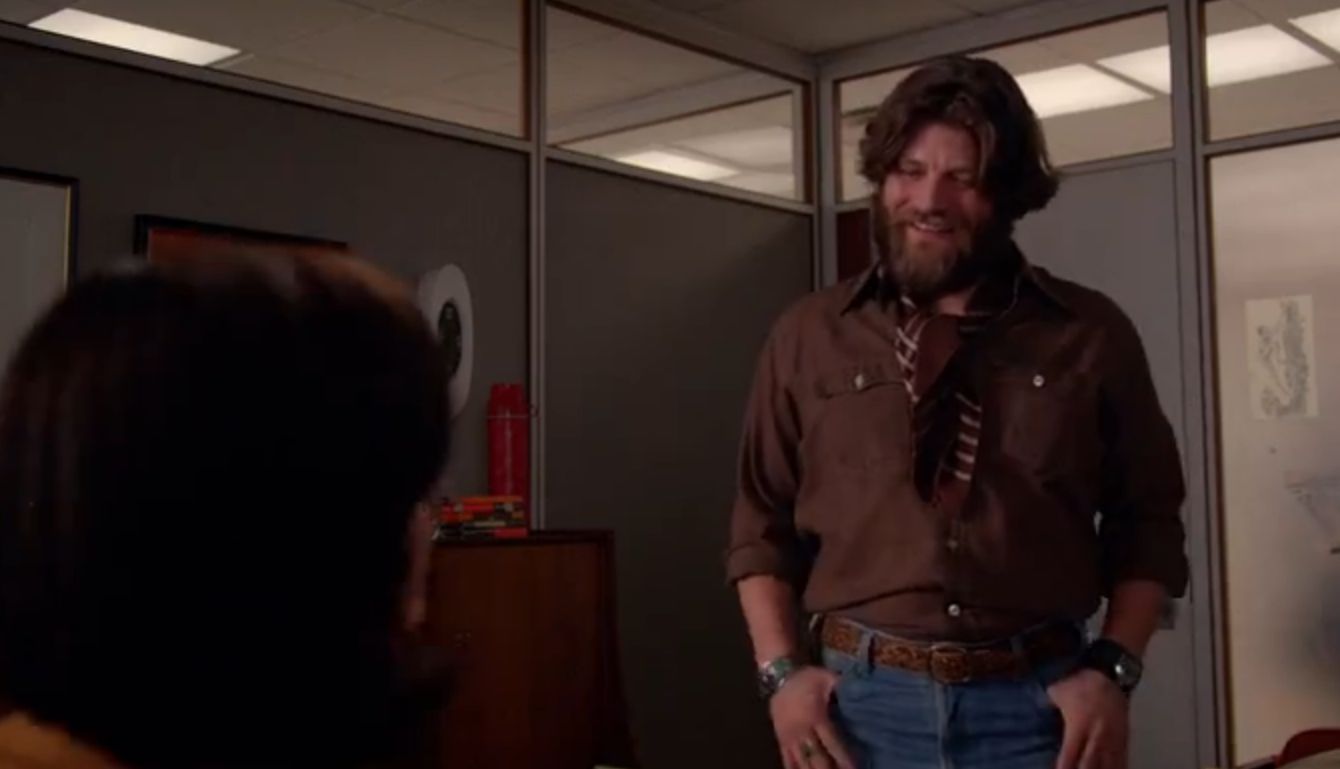 Stan, of course, was the real star of this episode for me. I like how Stan just pops up for about thirty seconds per episode to be SO FUCKING CHILL and have THE RIGHT IDEA ABOUT EVERYTHING and wear nope not one but TWO smashing pieces of turquoise jewellery in "Severence"'s case. This was my favorite scene of the episode, when Peggy's being the hugest downer ever and wearing a crumpled orange vest and skirt combo as her dumpy hangover outfit, telling her cool confidante <3Stan<3 about her barely-embarrassing post-drunk France predicament and his body language is so breezy, so involved, and he says "Sounds like fun!" in such an easy, honest way, and his voice is like a grizzly bear speaking- okay, I just decided that my ultimate Mad Men outcome is for Peggy and Stan to end up together, and I want Stan to be the guy she goes to London not Paris with. Stan would love London! He'd feel so at home at a pub with "Arms" in the name. 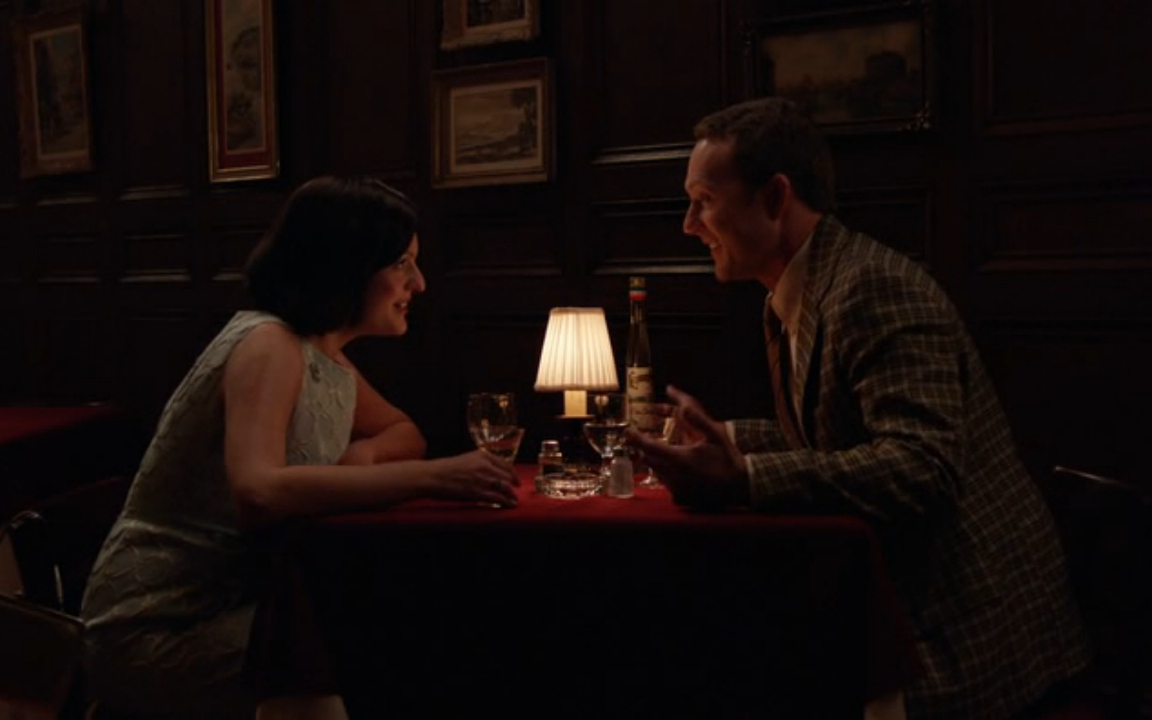 LIZ: I'm so happy Peggy Olson's in love with Brian Krakow now! It completely makes up for him never winning over Angela Chase. And he looks so good, with his vastly more managed hair. I love how awkwardly he rubs his palms together in that "Let's eat! Mangiamo!" gesture when their food arrives. And I'm proud of Peggy for bouncing back from the whole debacle with the lasagna and the veal, and from "Stevie"'s weirdly bitchy handling of all that. I worry that, if placed in the same situation, I would've gone all "Uh-oh, weak-willed. MAYDAY, MAYDAY!" But Peggy does that nice little pivot. She's so grown up now. She's really come a long way from "So...you drive a truck." So here's Stevie in Mr. Katimski's class, making cool points about how Peggy Olson's eyes are nothing like the sun:

But for me the star of the show was absolutely Kenny. I love his PJs and how he leaves them unbuttoned to reveal his cute belly and surprisingly abundant chest hair! I love his spitty delivery of the words "Ferg's feelings" in the meeting with Ferg and Roger. I love that little "Hmph!" sound he makes after Don walks away from the phone booth. I think it's so funny how he's already thought about how cool he'd look on a book jacket. Also, he's probably the best dad in the world, or at least on Mad Men. Second-best is Don - who's really trying with Sally and who will forever be one of my all-time favorite fictional dads because of that time he called Gene "honey" in season 4 - and at the bottom of the barrel is Pete. I love the hell out of Pete Campbell, but his reading of Goodnight Moon to Tammy in season 5 was so goddamn creepy. Although I do give him snaps for bringing it all back around later in that episode, when he's fighting with Trudy about hating Cos Cob and shouts "There's no goodnight noises anywhere!" Maybe Pete really is a writer. 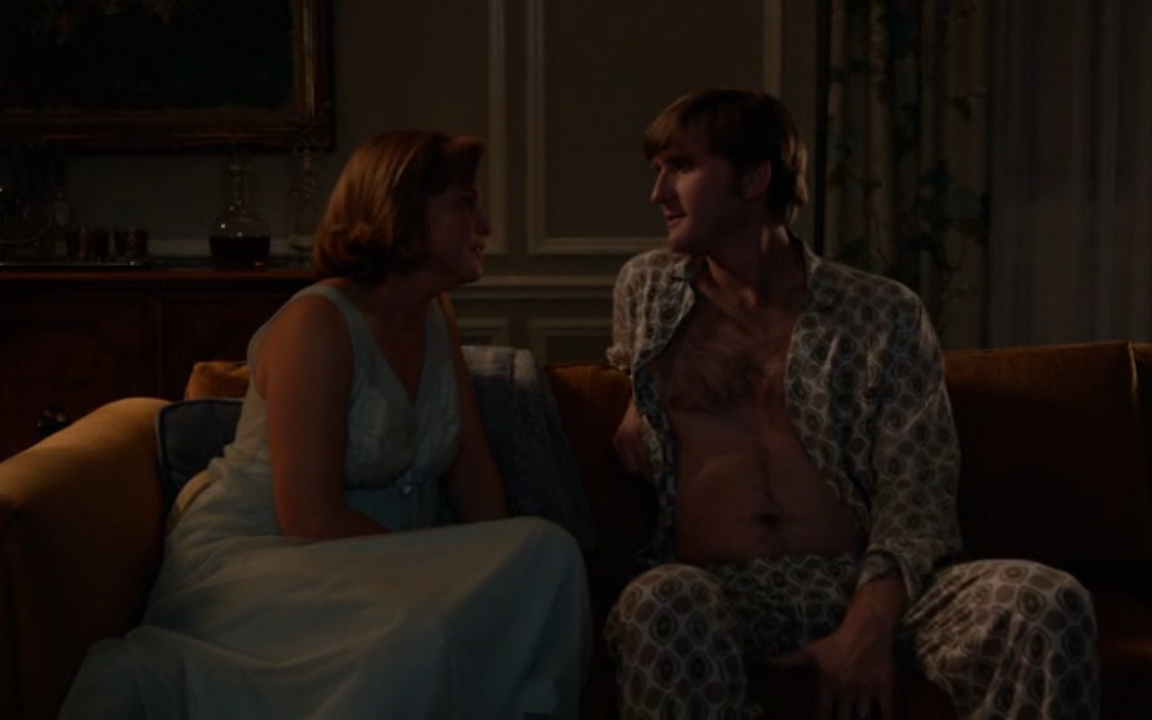 But yeah, in addition to the eye comment, I thought Jennifer's telling Ken he should write "something sad and sweet for all the people who don't have the guts to live their dream" was pretty bizarro. But also kind of on-point. Maybe that's what I'll say to people from now on, when they ask me what I'm writing. 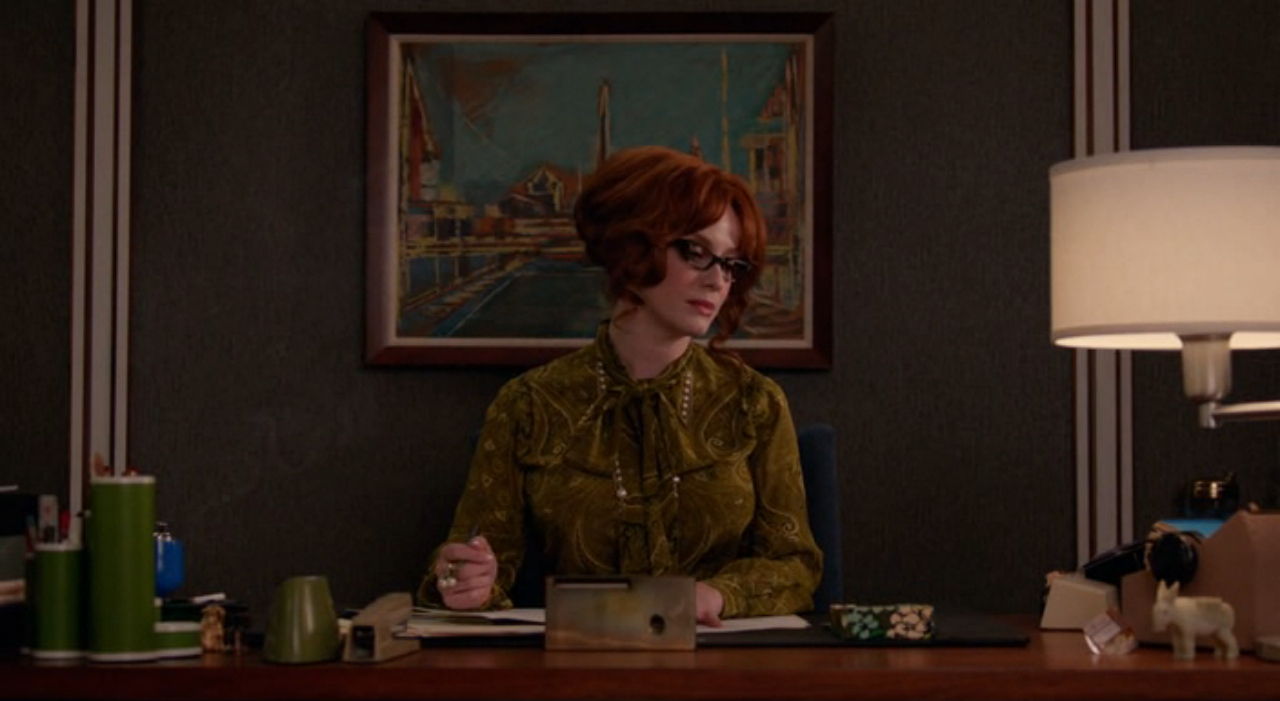 God, Joanie's retail therapy sesh was so depressing. Though I did appreciate how "I can wear that with boots" was the deciding factor on one of the dresses. All I want for the end of Mad Men is for (1) Joan and Don to be cool, (2) Joan and Peggy to be cool, (3) Joan to get everything she wants for the rest of her life and never have to deal with smug slimy losery sleazebags ever again. 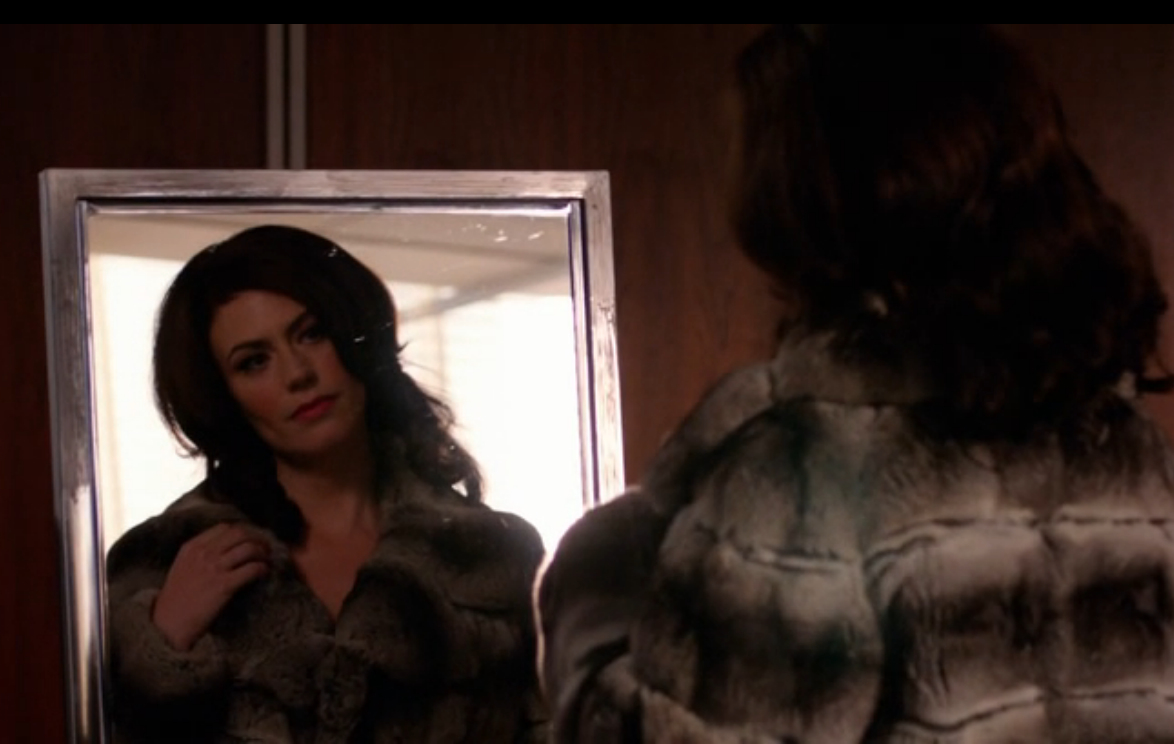 -Stoked that Don's back in his old office. And it's nice how he put Lane's Mets pennant up on the wall.

-Oh my god, when the Topaz guy calls Harry "Mr. Potato Head," and then in the next shot Harry looks exactly like Mr. Potato Head: genius! Love a good Mad Men sight gag.

-Is Ted Chaough divorced? Is that why he's allowed to have Don over to his apartment to pre-game the Vogue party? Super-curious. I even wrote in my notebook "Ted Chaough: divorced?", my second time watching this episode.

-I like Elizabeth Reaser. When she was on True Detective for three seconds, I was still holding a grudge against her for being in the terrible and hateful movie Young Adult. I'm over it now. She should break out of the "boring/adoring wife/girlfriend" role more often. 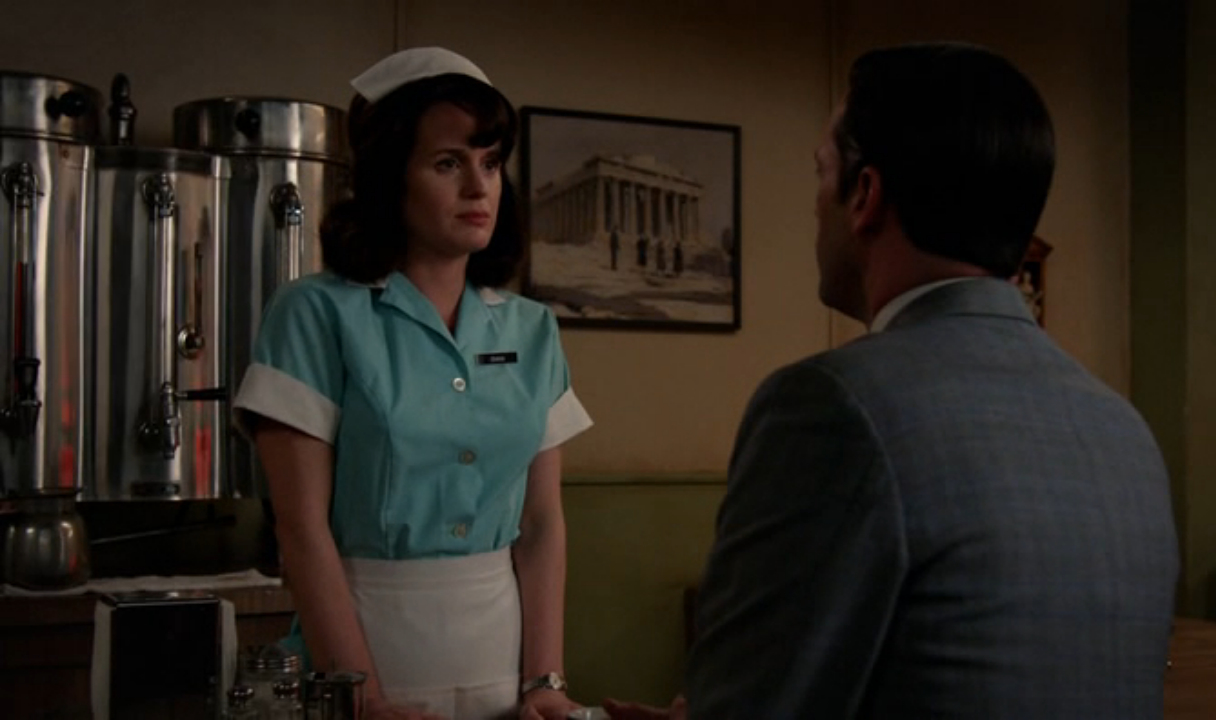 -And I had to include my own Stan screencap because (1) Stan Rizzo all the time forever and (2) I wanted to show off his cool mood ring. I love how in each season Stan Rizzo becomes more and more groovy and further and further away from his obnoxious, boxy-bodied frat-boy-nudist self of season 4. Let's have a spinoff where Stan Rizzo goes away to California like he always wanted, and lives in Venice on the boardwalk and drinks beer in beach bars all the time, and gets a cool bartender girlfriend, smartly avoiding the whole totally-played-out Laurel Canyon scene. I really wanna know what Stan Rizzo's favorite band is, though my money's on Creedence Clearwater Revival. 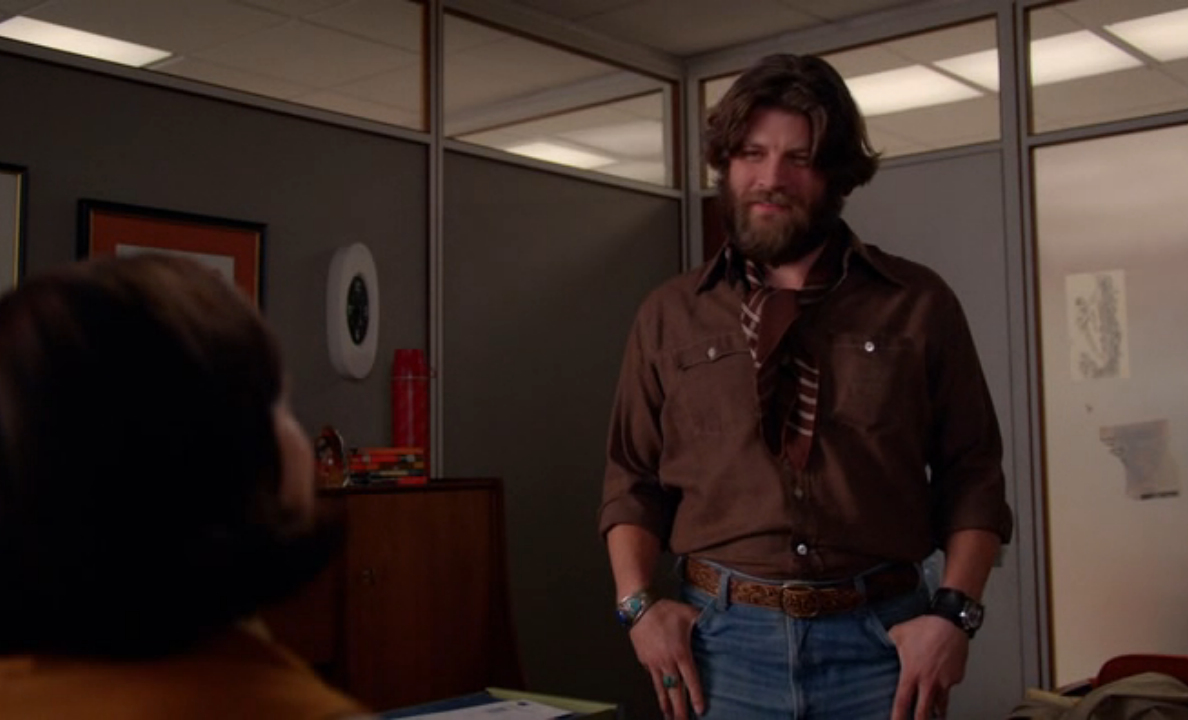 Posted by Elizabeth Barker and Laura Jane Faulds at 11:59:00 am