Eating Highlights From My Holy Grail of New York Trips 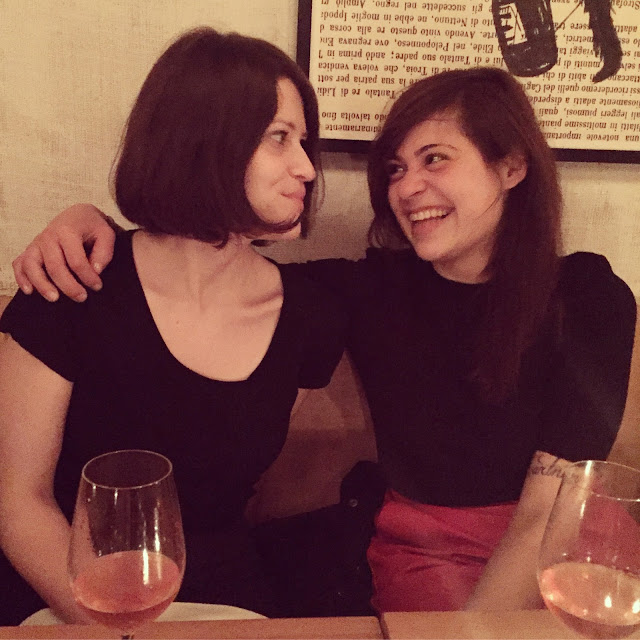 (above: me w/ Lexy, my Holy Grail of beloved pals.
I don't think I've ever gazed so adoringly at another person)

I woke up early in a hotel room on Wall Street, well off Wall Street, but it sounds nicer to say Wall Street than the actual name of the street, which was: William (boring). My mother and I went downstairs to eat continental breakfast in the restaurant attached to the hotel but it was a terrible vibe. The only free thing was cereal and the entire operation seemed to be entirely unmanned. I saw a Dunkin Donuts sign flashing outside the window and snapped/sighed, “Let’s just go to Dunkin; you can get a bagel there.” I said the thing about a bagel like an accusation, ragged capitals carved into a speech bubble made of metal. I am a stone cold bitch before coffee and also after. 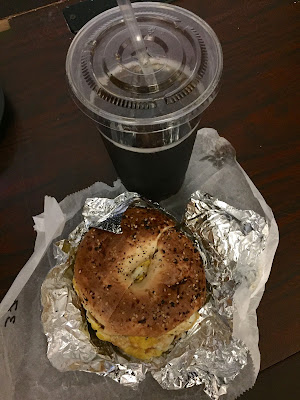 We did not go to Dunkin. We went to the place next door to it, which was one of the classic New York deli-bodega hybrids that serves like hundreds of different types of sandwiches on assorted New Yorky breads and also boasts a hot buffet and salad bar. I ate the same breakfast every morning of my trip: an everything bagel toasted with two fried eggs. On the second day I started asking for a bit of salt & pepper on the eggs but I dared not desecrate that sacrosanct breakfast with any further accoutrements. I am feeling aesthetically austere this November and I prefer for my food choices to compliment my life concept.

We ate lunch at the Moma café. I actively loathed it. It was small and phony-Yoko white and I felt like the whole thing was jammed into an awkward place, physically an awkward location at the museum, like they built the entire Moma and then it was a couple days before it was set to open and someone realized that they forgot to build a café so they just crammed one in wherever they could find. The waitstaff were all wearing Keith Haring t-shirts and I thought, “If I never had to see a picture of one of those fingerless faceless Keith Haring little guys again in my life, I would not shed a tear.” I ate a dessert for lunch, a moderately-tacky dessert that was lush as fuck and I adored the act of eating it, I loved assembling all the different parts into different-tasting bites. I love eating with a dessert fork, so delicate, it’s like hugging a thin dog. 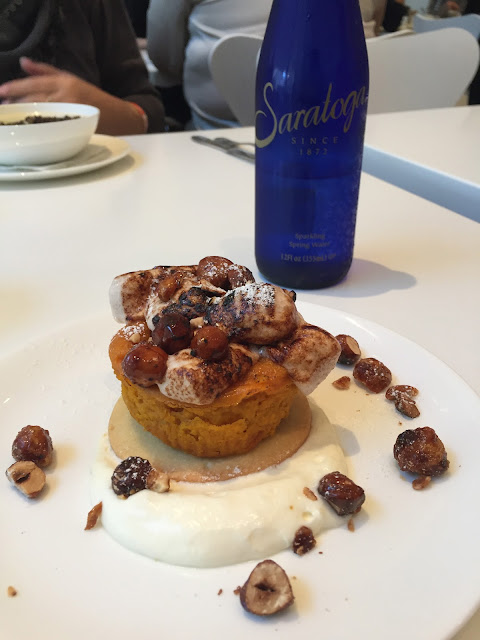 The only downside of my dessert is it was a bit too on-the-nose about its having an autumnal flavour profile: pumpkin tart, ricotta cream, toasted marshmallow, praline. Like we get it, pal: you are a campfire, a mitten, a burnt leaf. The pumpkin filling and the ricotta cream were oddly, awesomely savoury— they had a dullness to them, a cardboardy thump. I hadn’t been needing to taste sugar too terribly, it was just that nothing else on the menu sounded very worth eating and dessert tends to be a safer bet than non-dessert if deliciousness is what you're chasing. Whenever people come into restaurants I run and order dessert to eat at the same time as the person they’re dining with has their regular main, I think: You are my people. I feel the same way about any person drinking a glass of white wine alone, or a woman crying across the table from her boyfriend. Asking for the bill early and storming out.

Read more »
Posted by Elizabeth Barker and Laura Jane Faulds at 9:40:00 am 1 comments