Two Things That Create A Really Cool Atmosphere Together

1. The part in Chronicles, Volume One Where Bob Dylan Says But what he say, I knew not what About James Joyce 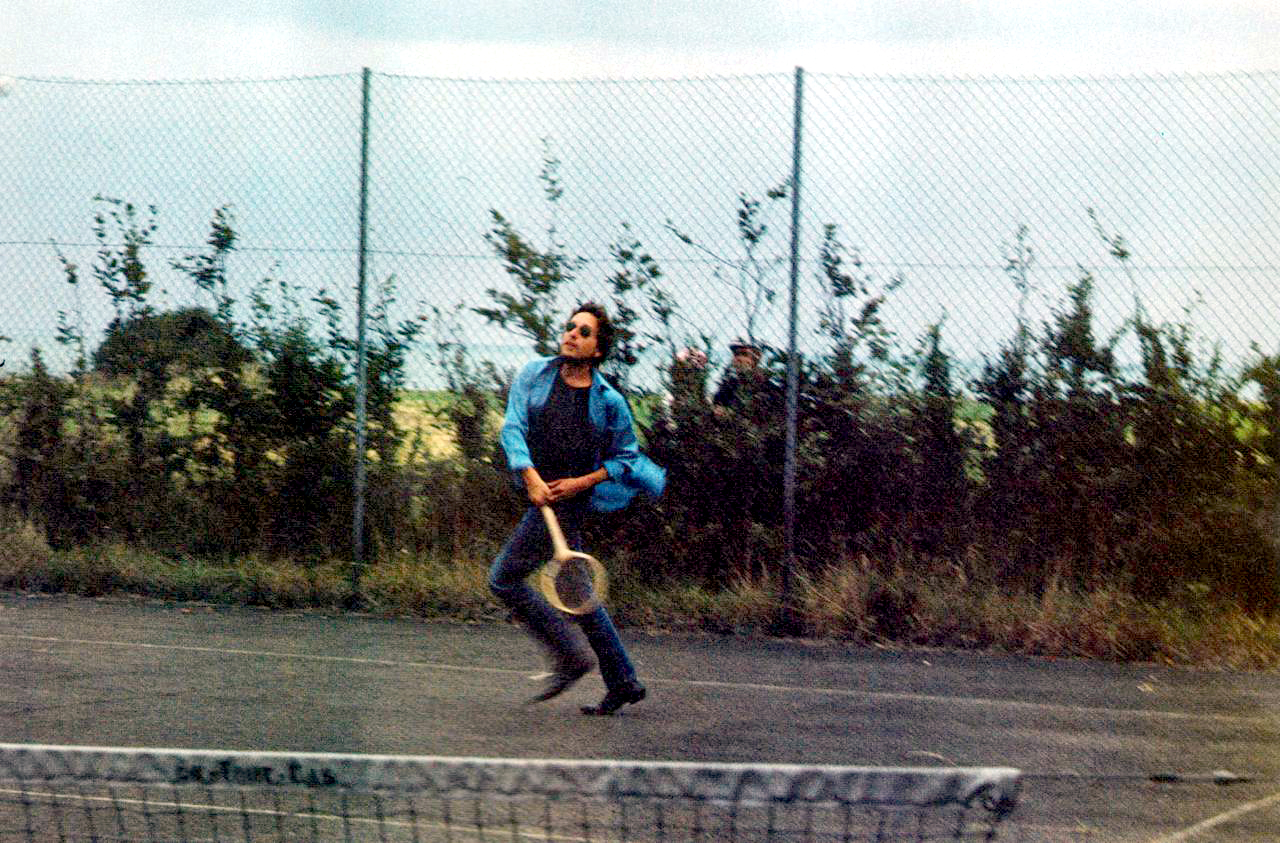 Bob Dylan is so important to me that the only reason in the world I don't have his name tattooed on my body is because I think he would think that was pretty lame and pathetic of me. I read his book last Autumn; it's an excellent book. My third-favorite part of Bob Dylan's excellent book is when he talks about how Joan Baez was famous before him but he knew in some fiery and guttural way that one day he would get to her. That's so magical for Bob Dylan- I wish every crazy thing I knew in some fiery and guttural way would come so fantastically true. My second-favorite part of Bob Dylan's book is when he says that Al Capone "seems like a man who never got out alone in nature for a minute in his life," which is a cool point to make about Al Capone or anybody and also stresses that Bob Dylan thinks it's important to get out alone in nature for a minute or two in one's life, which is true- I'd be pretty heartbroken to find out if Bob Dylan didn't think that.

2. The Scene When Pete & Peggy & Ted Chaough Have Oysters & Whiskey Sours & Everyone's in Love with Each Other 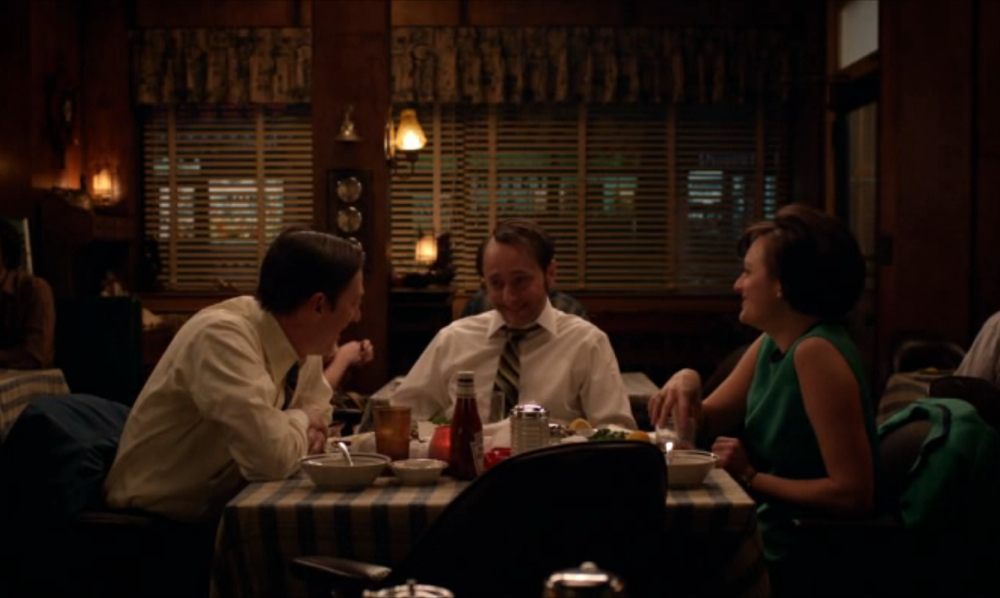 That was one of my favorite things in 2013. It's from the third-to-last episode of season 6 of Mad Men, which is titled "Favors." Pete and Peggy and Ted Chaough have just flown on Ted Chaough's plane to some meeting with Ocean Spray somewhere, and they're nicely drunk and laughing a lot - giggling - and you can really feel the looseness of their shoulders. Ted Chaough and Peggy are in love and Pete's a little jealous: 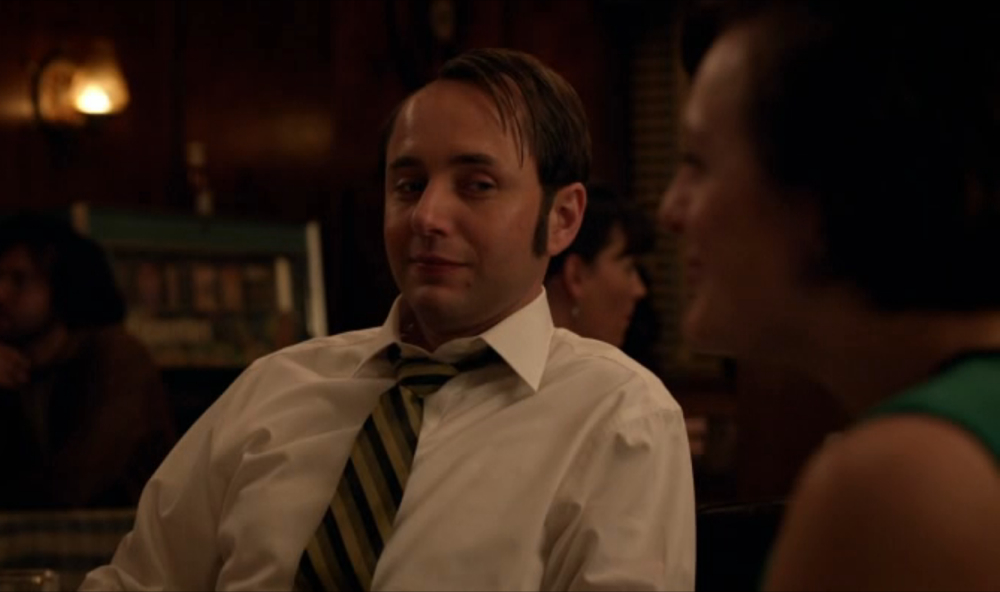 but he's also happy for her and says that sweet thing about "I've seen that look." And then Ted Chaough goes to call his wife, and Pete and Peggy are in love with each other again for a minute, and then Peggy makes fun of Pete for being in love with Ted. It's all very romantic and Pete refers to it as "a romantic dinner," and the restaurant has checkered tablecloths and lots of nautical decor and those cute dumb red candles with netting. The best is how Peggy asks Ted to order her a whiskey sour and then the whiskey sour comes and Pete steals it, then pours half into his own glass: 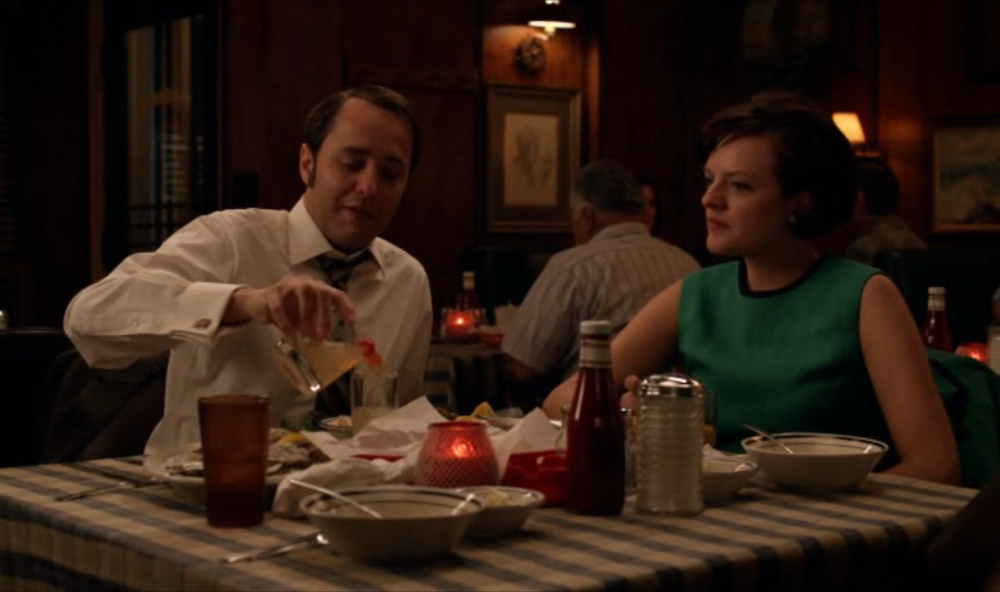 and Peggy looks a little annoyed, but whatever, she's cool, it's all right. I was listening to a Grantland interview with Chuck Klosterman and he was talking about this scene and saying how Pete and Peggy have an "easy knowledge" of each other that's kind of rare on Mad Men/in life, and that really got to me. Easy knowledge is everything. Whiskey sours and oysters and loose shoulders and nice warm restaurants with wood paneling are everything. Along with this scene, another of my favorite things in 2013 was the end of "Freak Scene" by Dinosaur Jr., the part that goes "Sometimes I don't thrill you/Sometimes I think I'll kill you/Just don't let me fuck up will you/cuz when I need a friend it's still you." Sweetness hidden inside something weird and messy is one of the best kinds of sweetness, I feel.

-Liz
Posted by Elizabeth Barker and Laura Jane Faulds at 9:04:00 am 0 comments

Everyone I'm in Love with in the Big Star Movie 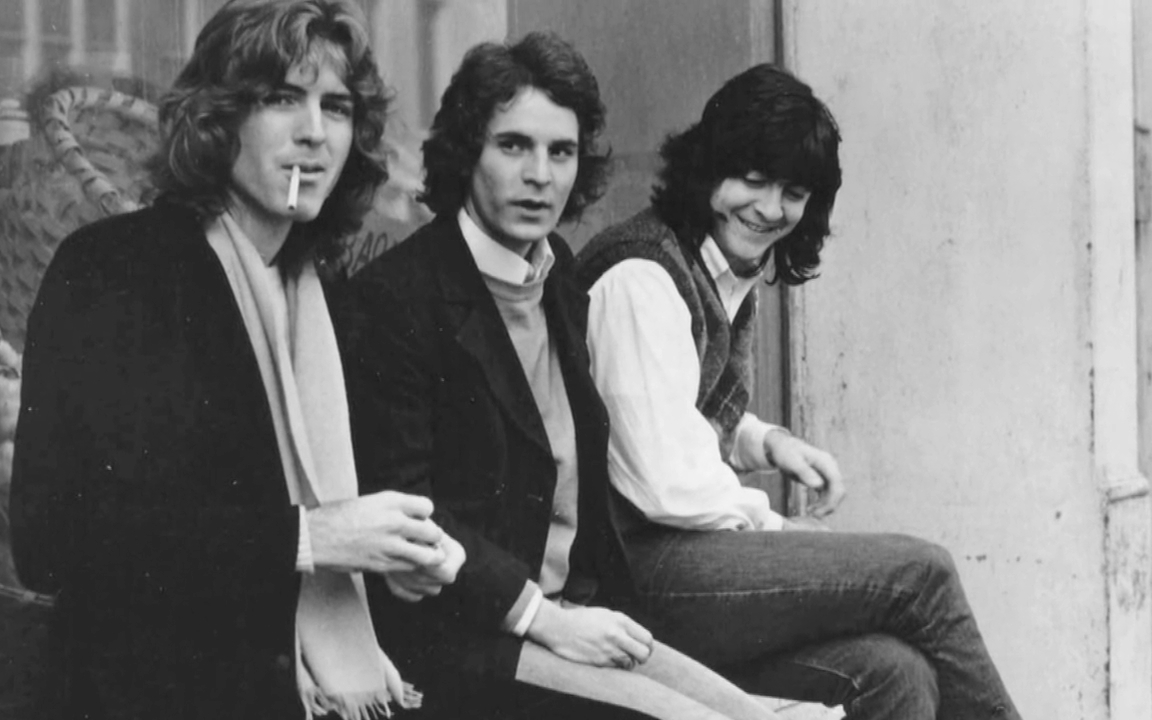 I saw the Big Star documentary at a press screening last May and I loved it, because it's about Big Star. It also kind of bugged me, for reasons that are unfair, like how so tragically little footage of Big Star exists in the world. After a while I got antsy watching a bunch of dudes talk about how great Big Star is (even though those dudes include Lenny Kaye, who's basically my favorite person). But now the movie's streaming on Netflix and I rewatched it last Sunday and it was less antsy-making: probably because I knew what to expect, but also because I watched it in bed in my PJs when it was nice and hot and sunny out. Bed is the best place for watching a Big Star movie; Big Star is very closely associated with sleeping and dreaming and being lazy and feeling perfect about it, at least in my book.

The movie's called Nothing Can Hurt Me, by the way, which is so smart. It's a lyric from "Big Black Car," which is maybe my third favorite Big Star song, I think? If you could get songs tattooed on your body - not song lyrics but like actual songs, with their complete actual sound and aura - then I'd get "Big Black Car" tattooed on myself. But you can't, so I got Alex Chilton's name tattooed on me instead. So here is a list about Alex, and everyone/everything else I love in the Big Star movie:

i. ALL OF BIG STAR, ALL TOGETHER 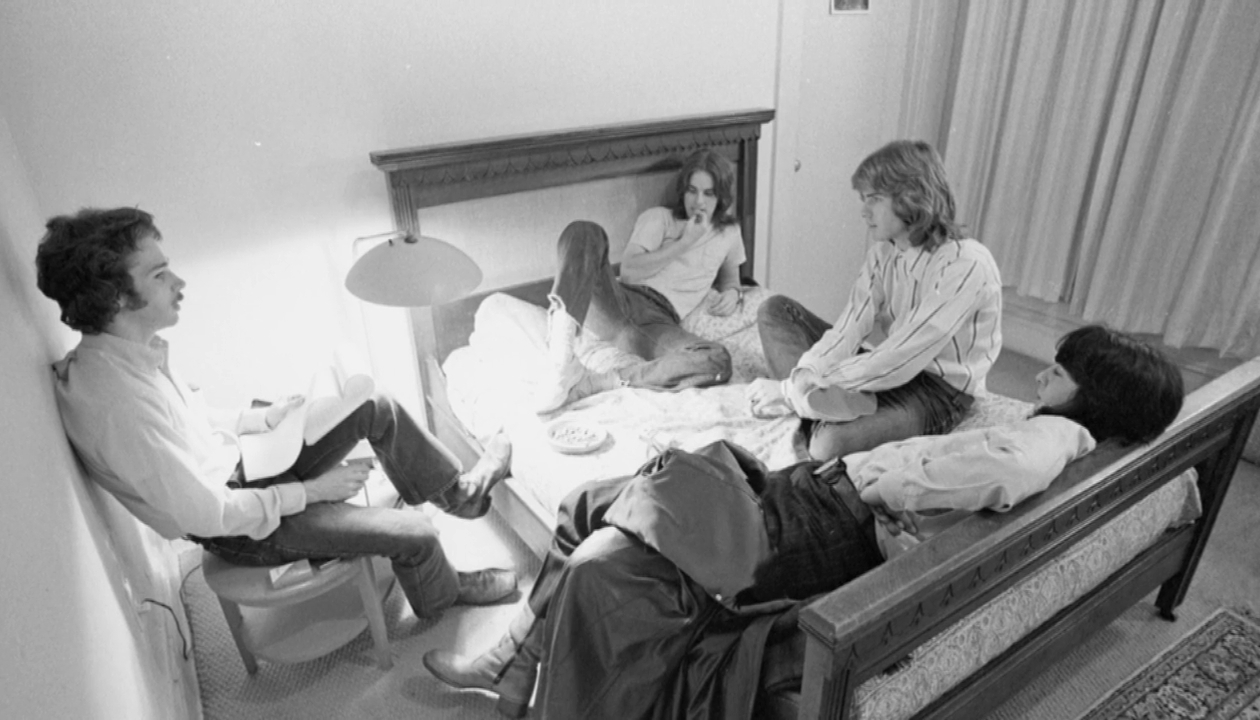 For some reason the other day I read the first paragraph of the New York magazine review of Wolf of Wall Street, which says how in the movie Martin Scorsese "continues his worship of masculine energy: energy for its own sake, energy as a means of actualizing the self, energy because there’s nothing worse in Scorsese’s cosmos than passivity, which inevitably translates as impotence." I like Martin Scorsese's movies just fine, but mostly that sentence interests me because I'm into the idea of Big Star as an alternative to Scorsese-y energy: energy that's masculine and feminine, tough and dreamy, neither active nor passive, just...receptive. That's the sort of energy I worship.

Plus I just really love this picture because they're brothers. Weird brothers, I guess: I can't imagine too many brothers spend a lot of time sitting around bedrooms together. They're probably like the Darjeeling Limited brothers, bitchy and impossible and hotheaded and wonderful. Wes Anderson is a nice alternative to Martin Scorsese. 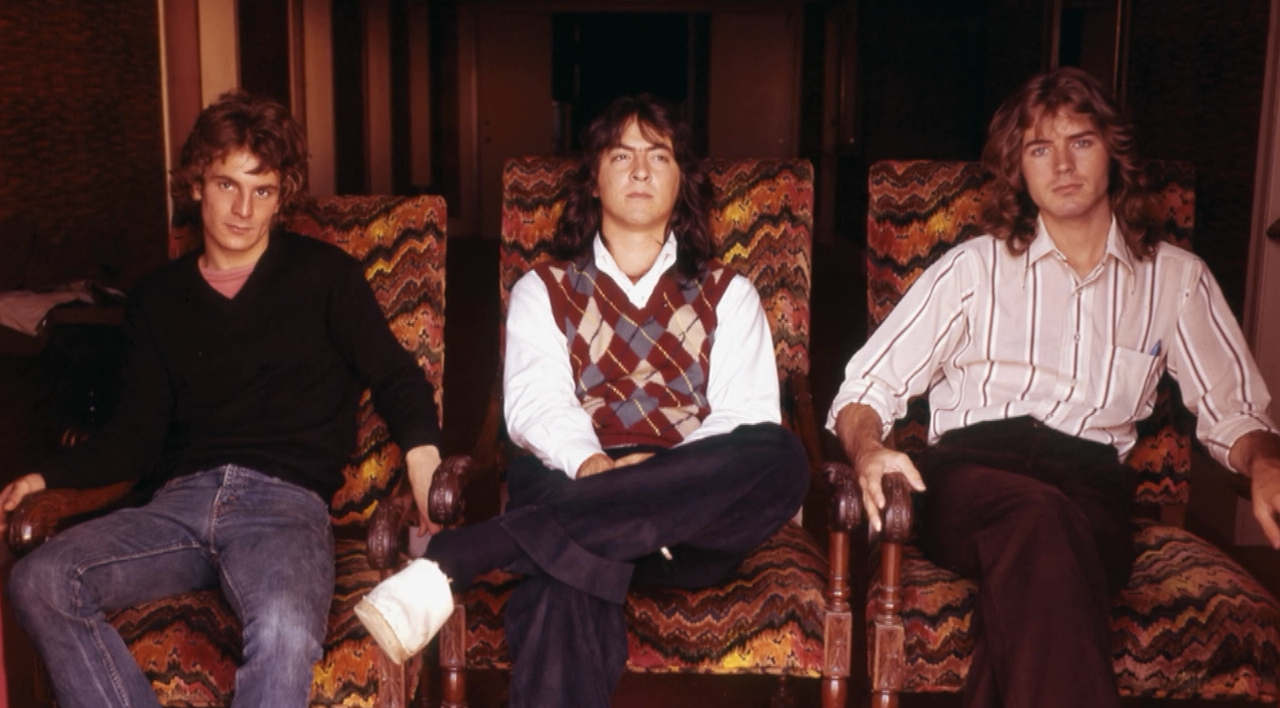 It's sad that Chris Bell left when he did but we have to accept it, I guess. And they look pretty all right as a trio, especially here, with Alex being a big diva and Jody having amazing bangs as per yoozsh: 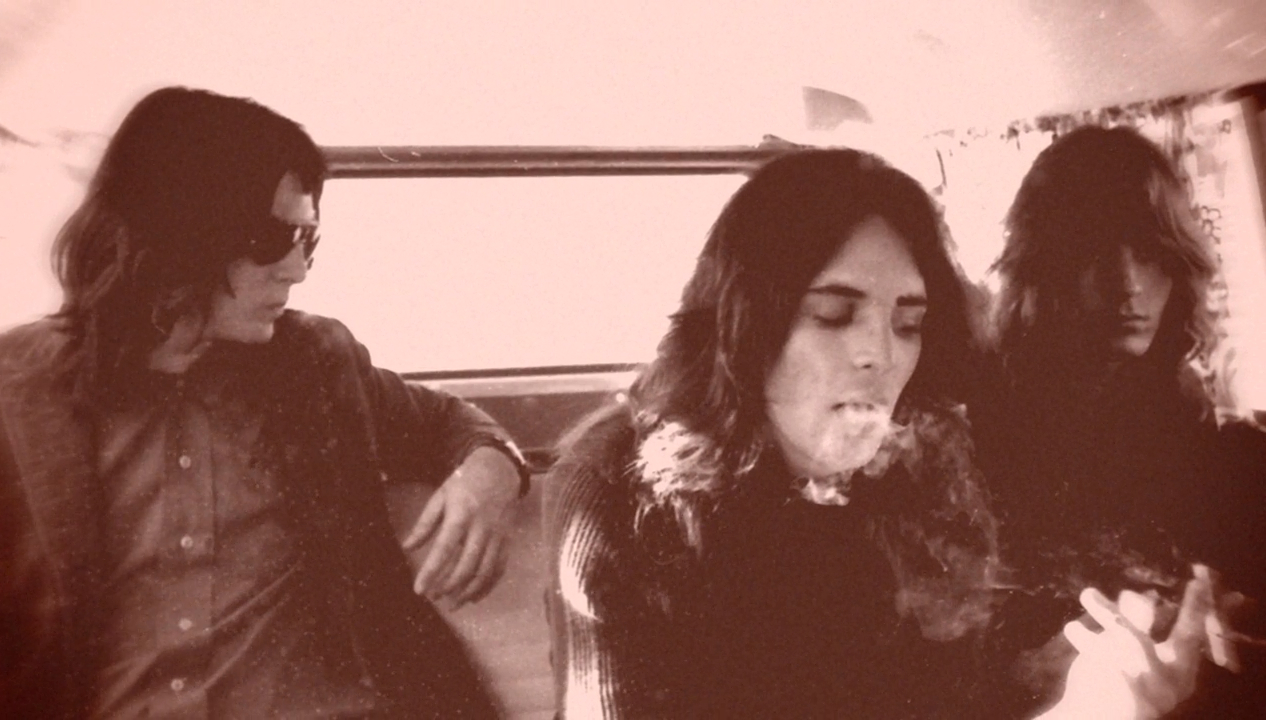 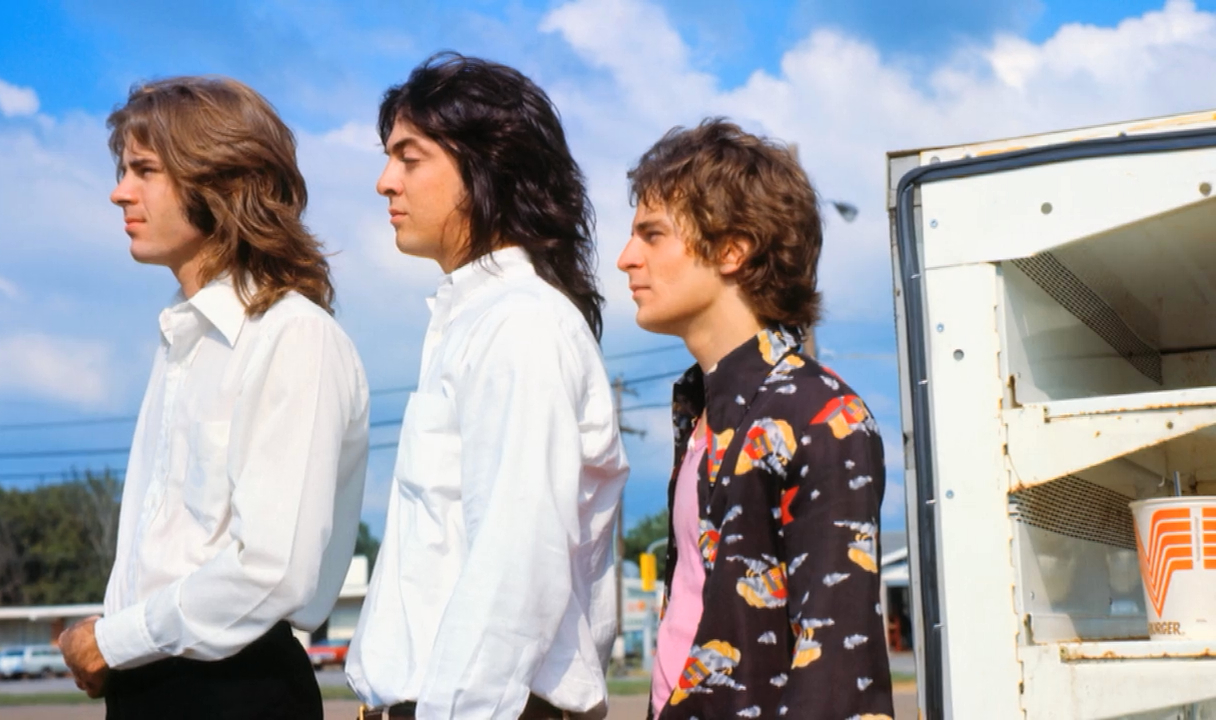 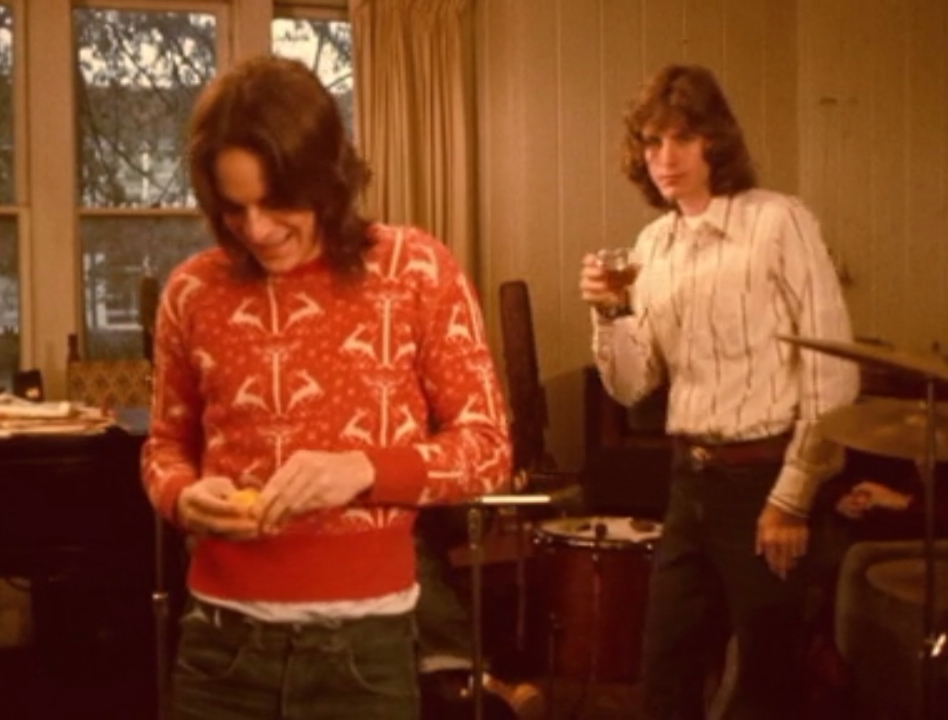 Some Cool Shit I Wish I Owned, by Laura Jane 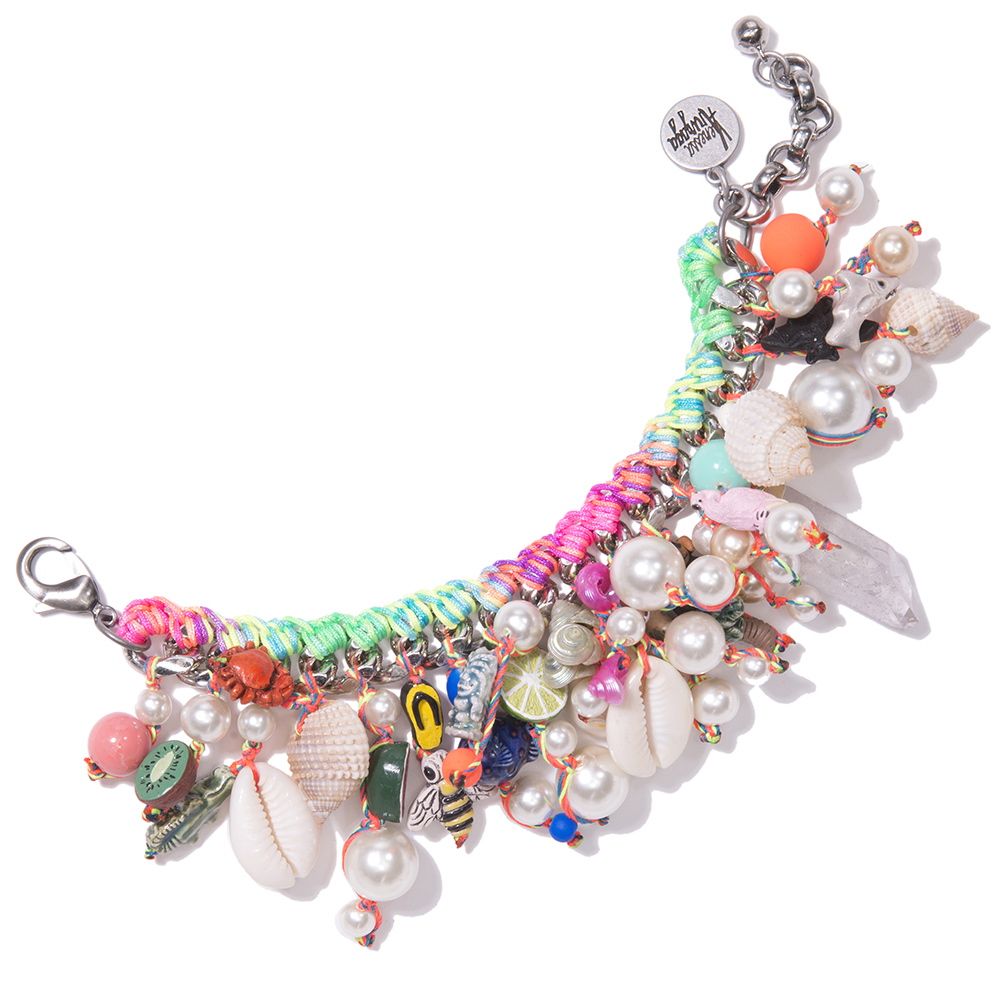 If Strawberry Fields Whatever was going to have an official, or unofficial, jewelry designer, I would definitely have to make it be Venessa Arizaga. There's a lot of weird and beautiful things to look at on her website, which you can find by clicking on her name in the heading of this section. The bracelet seen above is called the Hawaiian Punch bracelet- my favorite part of it is the kiwi fruit, and how it makes me remember the taste of Hawaiian Punch on my tongue. She also names a lot of her jewelry after songs, songs that I love; most impressively, there's a Dear Landlord necklace, which is a very strange choice of Bob Dylan song to name a necklace after. I really have no choice but to support a jewelry designer who names her shit after John Wesley Harding album tracks.

PS: Also I think that SFW needs to have bonkers Venessa Arizaga friendship bracelets! This bracelet is called the Makai bracelet, and I think Jen May should have it: 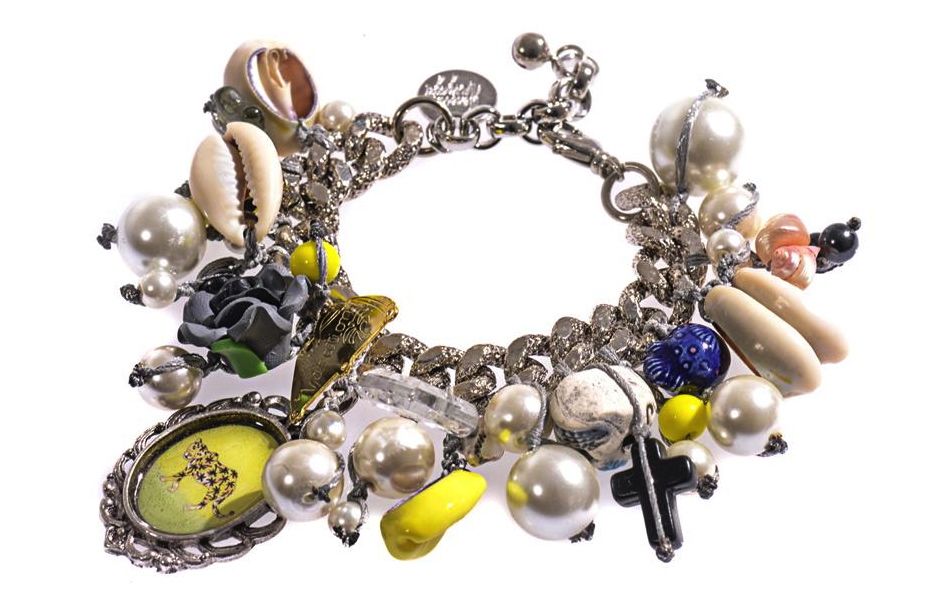 & this bracelet, called the Kamikaze, is for Liz: 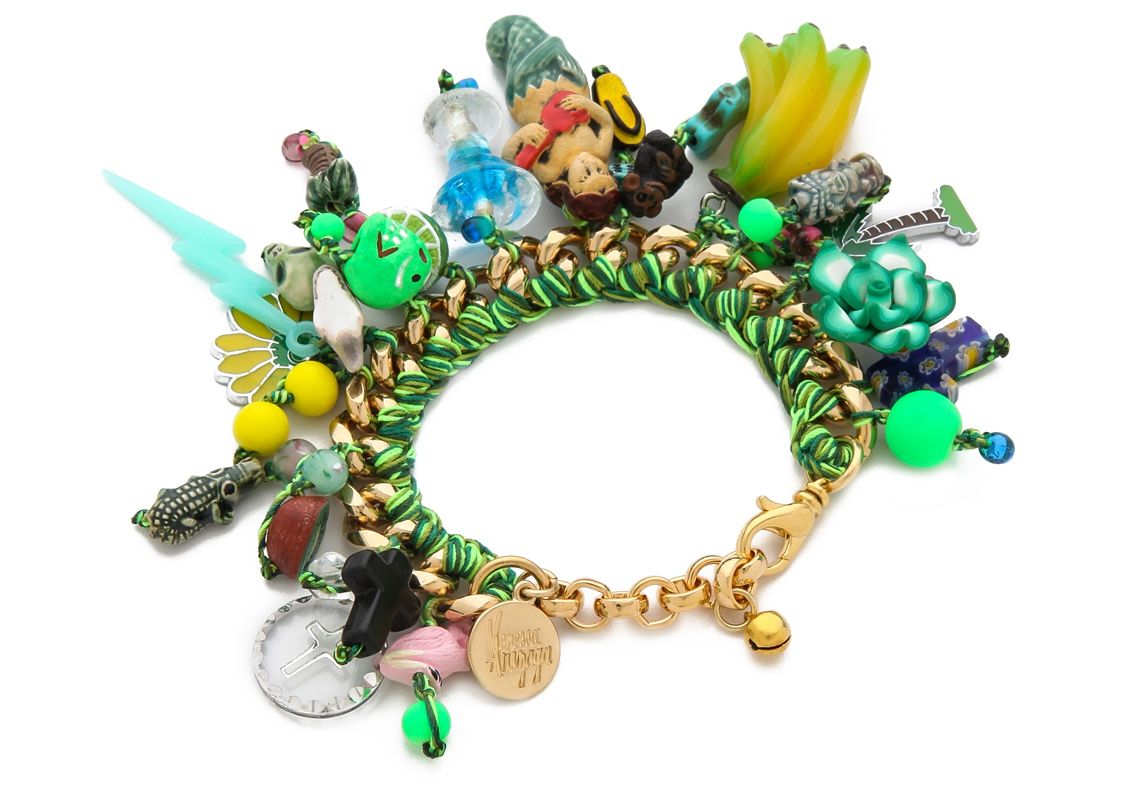 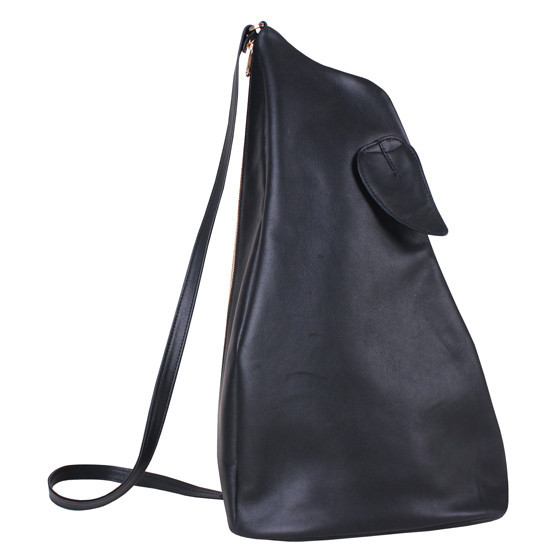 Lately I've been dressing pretty boring and sexy because I'm a boss and want to be feared a little, so this wolf-shaped bag really hits the spot and honours my boring sartorial present and wacky sartorial past at the same time; plus what the fuck is the fucking point of wearing something not-animal shaped if there is an animal-shaped option available?

Welcomecompanions is a really weird brand; their website is worth checking out. The concept is, they make things that look like other things. For instance, this really gorgeous banana-leaf shaped purse (I would still rather a purse was shaped like a leaf than not-a-leaf, even though a leaf is still inferior to an animal) 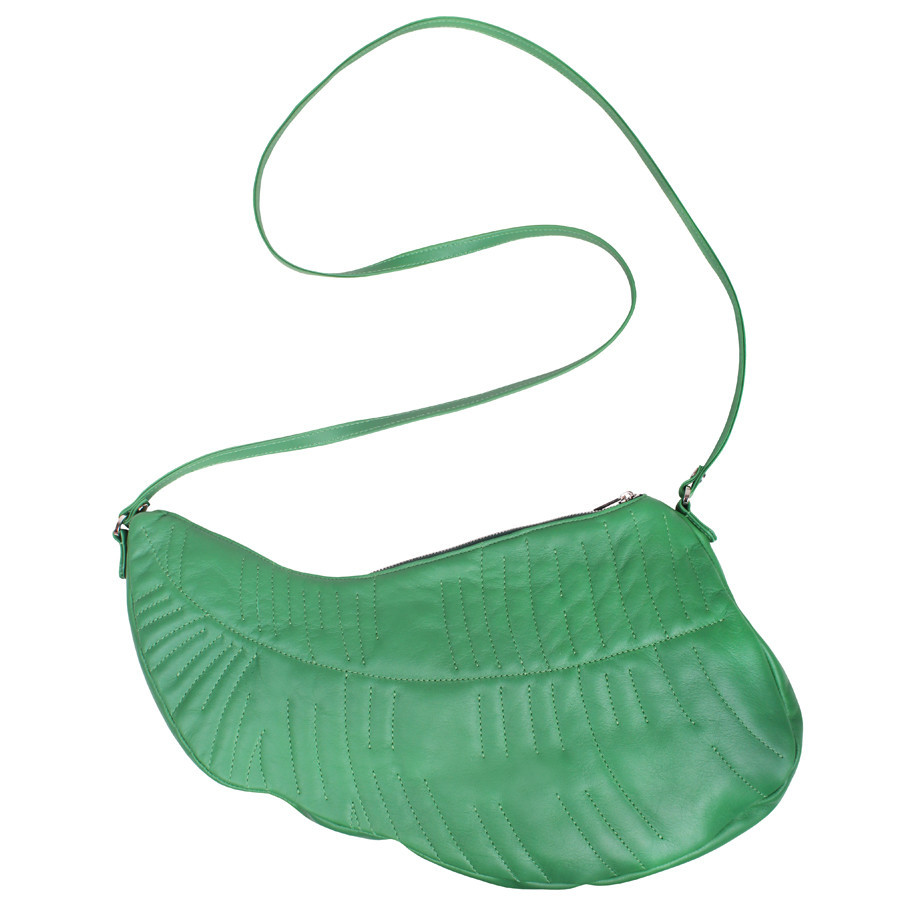 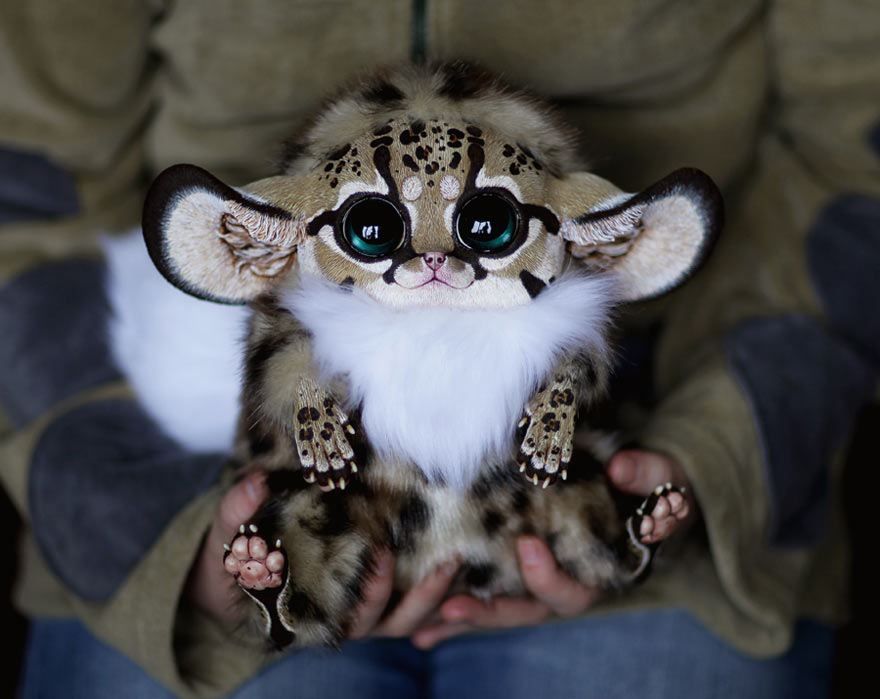 I posted the link to this page of fantasy animal babies to my Facebook wall and the link did this really trashy thing where the picture it attached to the link said IT'S SCARY HOW REAL THEY LOOK. A RUSSIAN GIRL MADE THEM AND NEVER EXPECTED A HUGE RESPONSE... and there was nothing I could do but accept the fact that my Facebook page was going to look lame in an Internetty way which I guess it does implicitly for being a Facebook page. But my point is, it was worth it to me, because look at this little cheetah baby alien! 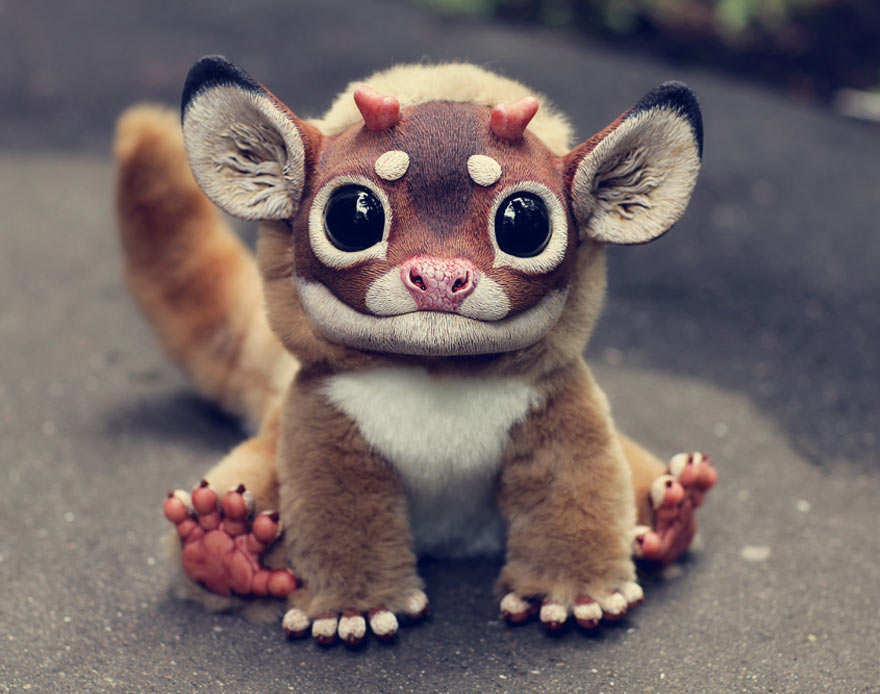 And look at this little deer baby alien! I feel like Kanye West should buy some of these for Nori.

Speaking of Kanye, look how fucking awesome this Kanye-coat is! 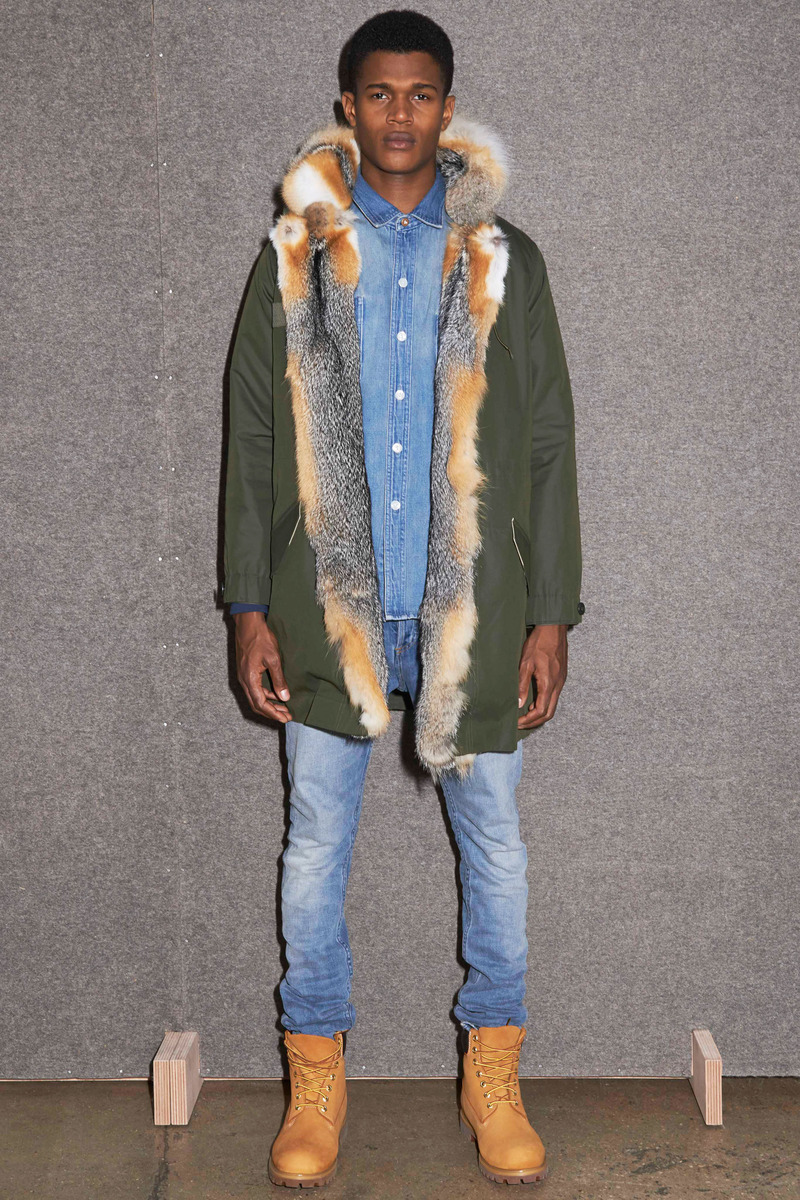 Kanye-coat, I really like the word Kanye-coat. Kanyecoat. This whole collection is definitely the best effort I've seen from fashion-Kanye to date, there's a sweater that says "Le Ski," which is nice. There are a couple of misses, like a collarless white maybe scuba-material jacket with elbow-length sleeves, but isn't that the greatest part of Kanye West? The misses? 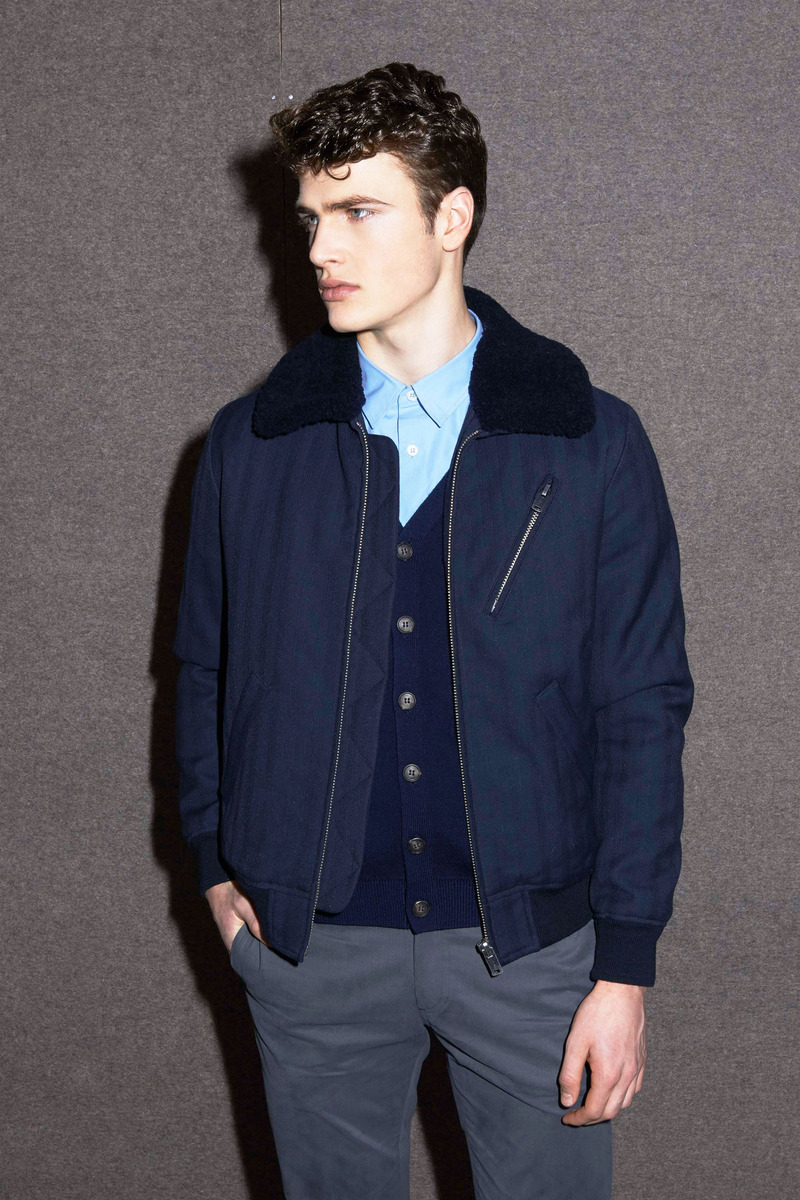 Posted by Elizabeth Barker and Laura Jane Faulds at 9:30:00 am 0 comments