Infinitely Stunned with a Pail of Rainbow Sherbet: A 2017 Thing About Kurt Cobain 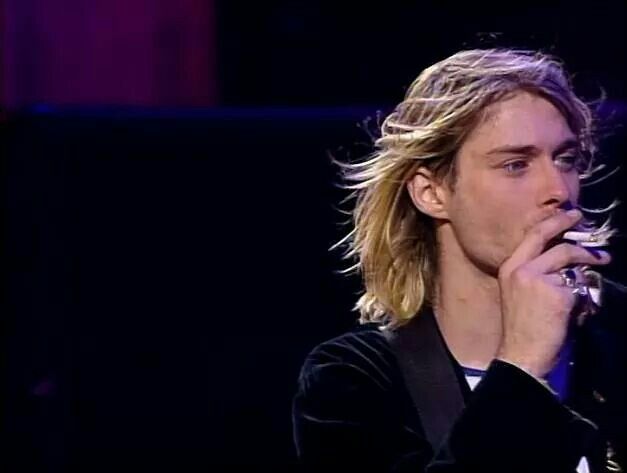 If Kurt Cobain were alive he’d be turning 50 on Monday. Here are some Kurt things I’ve been thinking about lately:

i. Last month I listened to a bad recording of the Nirvana show I went to when I was 15. One of the first times Kurt talks to the crowd he says “Please don’t throw shoes” with this great big sigh in his voice - it’s only a few songs in, and he’s already so exasperated with us. He sounds like a sulky babysitter, and in a way he kind of is.

There’s some other good commentary during the show, about gin and AC/DC and the Buzzcocks and being addicted to cigarettes, but I was mostly listening for this thing that happened after “Smells Like Teen Spirit” and before “All Apologies.” It starts at 1:13:00 of the video below, when Krist goes off on some guy in the crowd for groping a girl in the pit. He’s yelling and cursing in his big dopey Krist voice, and then Kurt comes in and just serenely eviscerates the guy. I loved him so much for that, and played that moment over and over in my head for so long after that night. I will never get over Kurt Cobain’s speaking voice, how he could be both deeply calm and totally withering at the same time. Some withering stage banter from Kurt Cobain would be so good in 2017.

The Sunday of the weekend Kurt died, I went out for my usual Sunday-morning breakfast with my dad and his girlfriend. I wore the shirt I bought the night I went to see Nirvana, and I ordered pancakes and made a big show of being sad about Kurt being dead. While we waited for our food my dad mansplained to me about how Kurt Cobain was the John Lennon of my generation, which I hated: I thought it was a lazy opinion lifted from a lazy description in the local newspaper, and I still feel that way. Kurt Cobain and John Lennon each had his own job to do in this world, and they were both very good at those jobs, but neither has all that much to do with the other.

HOWEVER, one thing that connects Kurt Cobain and John Lennon in my mind now is the likelihood that they’d both be fantastically hateful of the current president of the United States. They’d talk the most amazing shit about that person, and it would comfort us and make us feel cool. One of the qualities I most value in a rock-and-roll musician is the ability to make me feel temporarily protected from the ugly bullshit of the world but also in on some secret way to rise above it, and I suppose John Lennon and Kurt Cobain have each got that in spades. 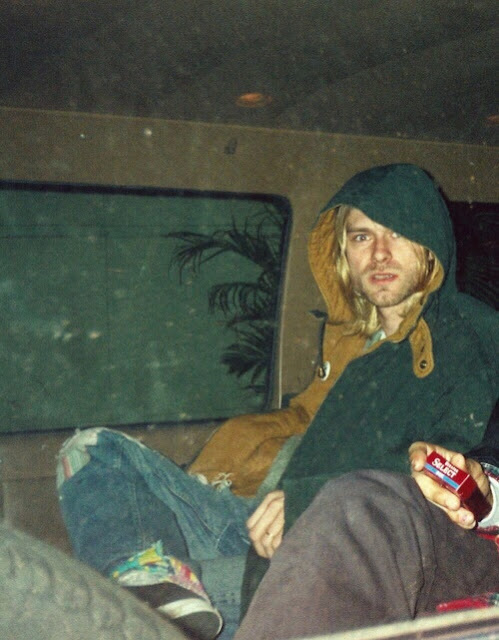 ii. Once upon a time when I was still a journalist and got paid to go to extravagant places and write about them, I spent a few days at a resort on a mountain by the ocean in Central California. During my stay I went on a hike with one of the guys who ran the resort, whose name was Jonah. Jonah was from Israel and served in the Israeli army and then came to America and got into the wellness industry. On our hike up the mountain and down to the beach he told me how, at some point in the last year of Kurt Cobain’s life, Kurt’s handlers had sent him to stay at the health spa where Jonah used to work. He talked about how he’d met with Kurt and how Kurt was this quiet kid, and how he wished they hadn’t pushed him back out into the world so quickly. He said something like, “They should have just let him be for a while. He was a poet.” I think that's maybe the loveliest thing I’ve ever heard anyone say about Kurt Cobain. Kurt doesn't get nearly enough loveliness spoken about him.

I’ve been listening to Bleach and Incesticide a lot lately and you can really feel Kurt being an unhealthy kid, with his weird stomach disease and all that. And there’s this video of the band practicing at Krist’s mom’s house in 1988, and they all remind me of the depressed metalhead boy who sat at my lunch table in ninth grade and always ate the worst lunches. They seem like they take terrible care of themselves, and eat the worst food all the time.

I remember watching a clip of that video when I was about 17 and thinking, “Nirvana are kind of gross.” But now we’re far away enough from their era that the grossness has become romantic. Nirvana makes me miss all the bad food I never eat anymore: foods from being a kid in 1988, like SpaghettiOs and Devil Dogs, ambrosia salad and strawberry Quik, a bologna sandwich on Wonder Bread, rainbow sherbet by the pail. Or how sometimes in school our snack would be a big slice of government cheese, served with a tiny carton of chocolate milk. I never even knew government cheese was called government cheese until I heard Krist say “government cheese” in an interview in 1993. No other band in the world had ever happened on a government-cheese level. Nirvana was the only one who knew those mundane/shitty details of your life, and now they make me remember parts of my life that I might have forgotten otherwise. 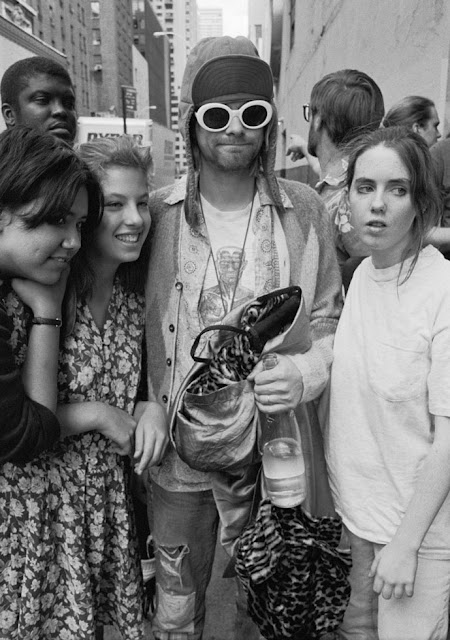 iii. On Sunday I went to look at the building where Kurt and Courtney lived in 1991/1992. It’s a nice place on a nice quiet street, a few blocks from Canter’s. Someone was playing piano inside and there was a Little Tikes basketball hoop on the front lawn. I took some pictures and walked down to Farmers Market, and on my way I passed the newsstand where there was a chubby little girl in a bathing suit and some ridiculous Pomeranians. At Farmers Market I bought a pint of strawberries and a cup of fountain Diet Coke and wrote for a few hours in my secret writing space, then walked back up Fairfax a little after dusk.

To me the stretch of Fairfax between Beverly and Melrose is one of the most reliably exciting places in Los Angeles. It’s always got this crazy energy that I don't really feel anywhere else in town. There’s Canter’s and a bunch of old bakeries and antique shops, but there’s also Undefeated and Supreme and the sidewalk's always packed with skater kids: they all look like the future, and like they’re having more fun than anyone else in the world.

On Sunday night I stopped at the Canter’s bakery and got a piece of chocolate rugelach, then walked back to my car at Kurt & Courtney's house. All the kids were smoking weed and one of the coffee shops was blasting the Patti Smith version of “Gloria” so that it spilled out onto the street and took over everything. It felt like being in 7 different decades at once, which is my favorite way for a city to feel. I ate my rugelach and thought some deep thoughts like, “I wonder if Kurt Cobain liked to walk down the street.” The air was electric and the rugelach was so super-buttery, it was heavier than heaven. 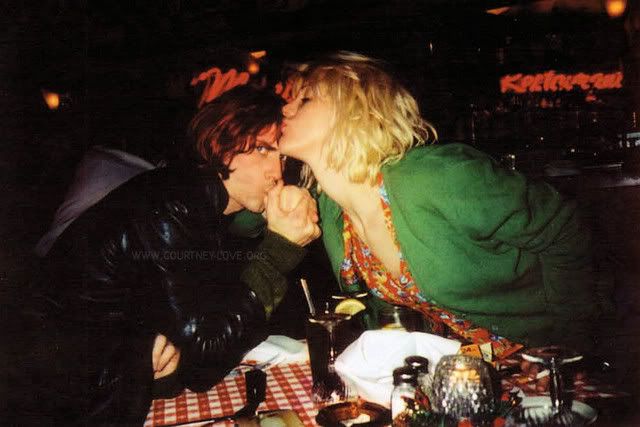 I don’t know what that stretch of Fairfax was like in 1991 and 1992, or if Kurt liked it there or liked L.A. in general. For the most part I don’t feel much of Kurt in Los Angeles, though some of the guitar parts on Nevermind sound like certain parts of the city – like the snarly riff thing at the intro to “Breed,” and then the fuzzed-up bassline that comes in alongside it. It sounds like going fast on some ugly road in the Valley where there’s nothing but auto shops and donut shops and hamburger stands about 40 years past their prime. You feel Nirvana in the most falling-apart places: falling-apart but totally magic.

I guess it's weird that it matters to me to be able to feel the presence of a guy who died 23 years when I’m walking down the street in my own city. It’s like that part in High Fidelity when John Cusack says, “Some people never got over Vietnam, or the night their band opened for Nirvana” -- but for me it’s that I just never got over Nirvana, period. I’m still fascinated by them, and I don’t want to ever get over that fascination. Fascination is useful: it keeps you unbored and unboring. The point is to keep fitting the fascination into your life even as your life changes, to use your idols in a new way so that they can accommodate you forever.

Lately my favorite song for walking around L.A. and thinking about Nirvana is “Drive” by R.E.M. To me that song is about Kurt, and what he did to the world and to the kids, with Nevermind. It sounds a million years old, in a dignified/butterfly-trapped-in-amber sort of way, but it still sounds like it’s all happening right now. I love how serious it is, and how it's somehow graceful about being completely over-the-top. But mostly I love it for sounding quietly stunned. Usually stunned is very fleeting, but listening to "Drive" makes me feel like you can go on being stunned forever. Infinitely stunned is a lovely way to be.