Some Wine I Drank In England 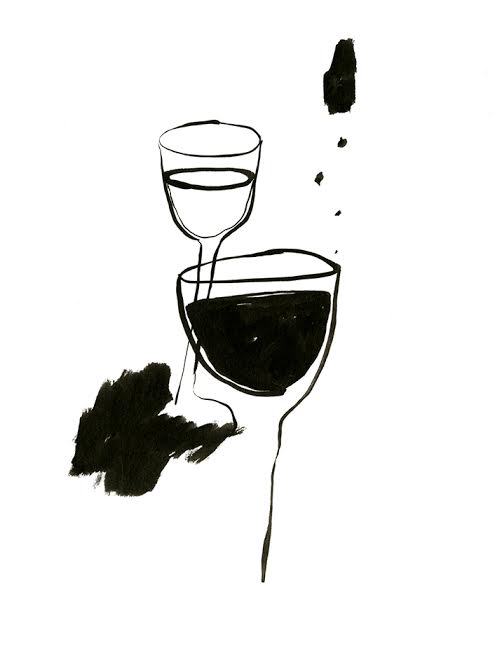 WORDS BY LJ/ DRAWING BY JEN

I am at an airport bar, and sadly, it’s not a very good one. But I am, however, here. So that's something!
At work yesterday, I told my friend how much I was looking forward to having a drink at an airport bar— “If you’re having a drink at an airport bar,” I told her, “It means you have literally nothing, in the world, to do, except have a drink at an airport bar.”
Even being on holiday is higher-stress than being at an airport bar. On holidays you have to go do something, go look at something, see a building, eat a food you can't get at home. You're supposed to be having a very special time and if for whatever reason at whatever moment you're not, it means you're fucking up your holiday and that kind of thing gets me really skittish. No one would ever ask you to be having a very special time at an airport bar. So I feel very safe here.
Here I am, me, at this piece of crap. I have fully committed myself to being here, drinking a glass of Prosecco, which I ordered on an iPad, which is bolstered to a wall. I briefly considered giving Wayne Gretzky Estates’ Chardonnay “No. 99” a go, as a joke about being Canadian to myself, but I needed bubbles. I needed this thing I’m doing to be as close to my romantic ideal of “drinking champagne at an airport bar” as I could get it.

(My tasting note for Belstar Prosecco: Sugar on the nose, plain white sugar, the bad stuff. And there’s fruit on it, stupid generic fruit flavour— it’s imprecise. Pears? Tangerines. Synthetic tangerine, some tangerine & acacia flower Bath & Body Works-branded bubble bathy body sprayey thing, but I don’t hate it, in fact I love it, it’s an on-the-nose example of its own horribleness, so I appreciate it for that, and also, okay, here's my thing: it’s better than a Fresca! That’s my tagline for Belstar Prosecco, if I were Don Draper pitching to the Belstar people, just get me in a room... "One hundred percent, unfuckwithably, you literally can’t deny it, the taste of it tastes better in your mouth than the taste of a can of Fresca- though not by much! But by a little.")

Read more »
Posted by Elizabeth Barker and Laura Jane Faulds at 8:00:00 am 0 comments